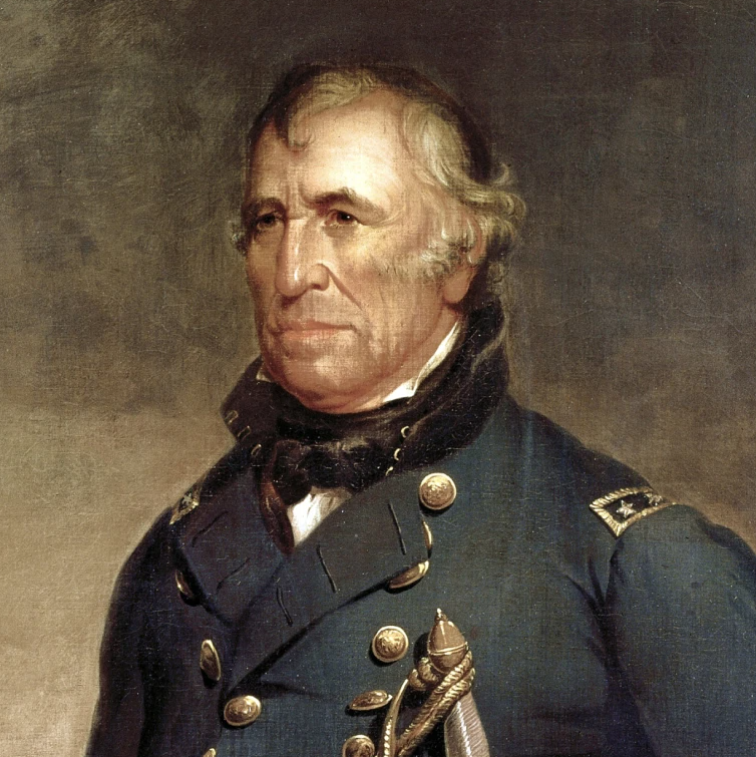 Zachary Taylor (1784-1850) served as the 12th president of the United States, from March 1849 until his passing in July of 1850. Before his election, Taylor was known for his exceptional success as an officer in the United States Army. Taylor served a short sixteen months in office but remained committed to preserving the Union throughout his presidential tenure.

Taylor was born in Virginia in 1784, but his family relocated to a plantation in Louisville, Kentucky when he was very young. In 1808, he was commissioned as a first lieutenant of the U.S. Army. In 1910, he married his wife, Mackall Smith, with whom he had six children.

Taylor quickly gained prominence in the U.S. Army. Before the War of 1812, for which he served as “captain,” Taylor defended the western frontier of the United States against Native Americans. Having proven himself, Taylor then served as a commander the Black Hawk War of 1832 and the Second Seminole War from 1837 to 1840. In the Mexican American War, Taylor served as a brigadier general and commanding officer, where he led his men to multiple victories. His success did not go unnoticed by President James Polk, who promoted Taylor to major general. His excellent leadership qualities won him the nickname of “Old Rough and Ready” because he was willing to fight with his men, instead of simply commanding them.

After leading his men across the Rio Grande and into Mexico, Taylor extended an 8-week armistice to the Mexicans, despite the wishes of President James Polk. In retaliation, Polk cancelled the peace agreement between the U.S. and Mexico, transferred the best of Taylor’s troops to another general, and ordered Taylor to remain in northern Mexico. But in 1847, Taylor ignored the orders of President Polk and instead led his troops to Buena Vista, where he and his men defeated a Mexican force more than three times their size.
Taylor was quickly gaining political prominence. He was popular in the North because of his military success and favored in the South because of his ownership of over 100 slaves. By early 1848, Taylor had become a leading candidate for president among the Whig party. Just six weeks before the national convention, Taylor declared his candidacy and won the Whig nomination. Because of his appeal to voters in the north and south, he won the general election and became the 12th president of the United States. He was victorious over Democratic candidate, Lewis Cass, and Free-Soil candidate, Martin Van Buren.

Zachary Taylor took office in 1849, at which point the debate over the expansion of slavery into new territory was widespread. Despite his slave ownership, however, Taylor’s time in the army made him a strong nationalist. By 1848, Taylor stood in opposition of the creation of new slave states. To achieve this goal, Taylor advised settlers in new territories, namely California and New Mexico, to draft constitutions and be admitted into the Union immediately, which would circumvent the territorial phase. Not shockingly, slave states were not fond of this plan as both California and New Mexico were unlikely to allow slavery. Many members of Congress were also displeased by this executive decision because they felt that it imposed on their power to legislate.

Taylor was fiercely committed to preserving the Union. In 1850, after some southern states threatened to secede, Taylor assured them that he would personally lead the army wherever necessary in order to preserve the Union and that those “taken in rebellion against the Union, he would hang … with less reluctance than he had hanged deserters and spies in Mexico.” Taylor grew increasingly unsympathetic towards the pleas of slave owners. As such, he opposed a compromise bill that would have appeased both the abolitionist north and the pre-slavery south. Fortunately for southerners, Taylor fell ill on July 4th while attending a ceremony at the Washington Monument in blistering heat. Only five days later, Taylor succumbed to his illnesses. Though harsh, Taylor is remembered for his popularity and composure amid fiery sectional tension. Richard, Taylor’s only son, would take after his father and serve as a general in the Confederate Army during the Civil War of 1861.