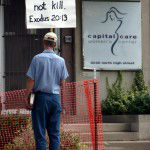 Abortion has become a hot topic during the 2012 presidential election, invoking strong words from both sides of the aisle. Therefore, it seems pertinent to go back and take a look at how the Supreme Court viewed the issued when it issued its landmark ruling in Roe. v. Wade, 410 U.S. 113 (1973).

The constitutional abortion challenge was filed on behalf of Norma L. McCorvey (“Jane Roe”). The pregnant woman claimed the Texas criminal statute banning all abortions, except for those needed to save the life of the mother, violated her constitutional rights.

Roe specifically alleged that she wished to terminate her pregnancy by an abortion “performed by a competent, licensed physician, under safe, clinical conditions,” but that she was unable to get a “legal” abortion in Texas because her life did not appear to be threatened by the continuation of her pregnancy. In addition, she could not afford to travel to another jurisdiction in order to secure a legal abortion under safe conditions.

The lawsuit alleged that the Texas abortion statutes were unconstitutionally vague and that they violated a woman’s right of personal privacy, protected by the First, Fourth, Fifth, Ninth, and Fourteenth Amendments. Roe purported to sue “on behalf of herself and all other women” similarly situated.

The Supreme Court began its opinion by acknowledging that it understood the significance of its opinion and the divergent views on abortion. “We forthwith acknowledge our awareness of the sensitive and emotional nature of the abortion controversy, of the vigorous opposing views, even among physicians, and of the deep and seemingly absolute convictions that the subject inspires,” the opinion states.

With regard to the legal issues presented, the Court agreed that the Texas abortion law was unconstitutional, as it violated the right to privacy embodied in the Constitution’s First, Fourth, Ninth, and Fourteenth Amendments. Citing a long list of cases, the Court concluded that the “zone of privacy” guaranteed by the Constitution is broad enough to encompass a woman’s decision whether or not to terminate her pregnancy.

The majority, however, concluded that the right to privacy was not absolute. It also recognized that the state has legitimate interests in protecting both the pregnant woman’s health and the potentiality of human life. It further reasoned that “[each of the interests] grows and reaches a ‘compelling’ point at various stages of the woman’s approach to term.” It is this part of the decision that allows states to enact more restrictive abortion rules for later phases of pregnancy.

Even though Roe v. Wade was decided in 1973, the legality of abortion remains as divisive as ever, with many calling for the Supreme Court or Congress to again revisit the issue.