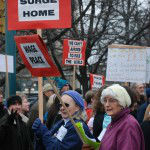 Free speech is one of the bedrock principles of the U.S. Constitution. However, what happens when someone wears potentially offensive clothing into the halls of our most hallowed court?

A Florida man, and former Marine, is currently suing the federal government after he was arrested for wearing a jacket with the words “Occupy Everywhere” in the exhibit hall of the Supreme Court. According to Reuters, officers told Fitzgerald Scott that he needed to remove the jacket because it was “a sign, a demonstration,” referencing the Occupy Movement. When he did not comply, he was arrested for unlawful entry.

Although the charges were later dropped, Scott has filed suit for damages. He argues that his jacket constituted “pure speech” protected under the First Amendment and he should have been able to wear it into the Supreme Court.

Nineteen-year-old Paul Cohen was convicted of violating a part of Cal.Penal Code § 415 which prohibits “maliciously and willfully disturb[ing] the peace or quiet of any neighborhood or person . . . by . . . offensive conduct,” after wearing a jacket bearing the words “F*** the Draft” in a corridor of the Los Angeles Courthouse. The Court of Appeal held that “offensive conduct” means “behavior which has a tendency to provoke others to acts of violence or to in turn disturb the peace,” and affirmed the conviction. Cohen appealed to the Supreme Court, contending that the California statute violated the First Amendment.

The Supreme Court agreed, famously noting, “One man’s vulgarity is another’s lyric.” Writing for the majority, Justice John Marshall Harlan II concluded, “[A]bsent a more particularized and compelling reason for its actions, the State may not, consistently with the First and Fourteenth Amendments, make the simple public display of this single four-letter expletive a criminal offense.”

In reaching its decision, the Court concluded that the jacket worn by Cohen constituted speech rather than conduct. It further noted that there was no evidence that Cohen intended to incite disobedience or disrupt the draft. As such, California lacked the power to punish Cohen for the underlying content of the message the inscription on his jacket conveyed.

Therefore, to survive constitutional scrutiny, the Court reasoned that the speech must fall within one or more of the various established exceptions to the usual rule that governmental bodies may not prescribe the form or content of individual expression. However, the Court again concluded otherwise.

It first noted that the statute did not just apply to courthouses or other specified locations, but rather throughout the state of California. The Court also found that the message conveyed on Cohen’s jacket was neither obscene nor considered “fighting words,” both of which allow greater regulation.

“No individual actually or likely to be present could reasonably have regarded the words on appellant’s jacket as a direct personal insult. Nor do we have here an instance of the exercise of the State’s police power to prevent a speaker from intentionally provoking a given group to hostile reaction,” Justice Harlan wrote.

Finally, the Court rejected the argument that the state should be able to protect the public from offensive words such as those displayed on Cohen’s jacket. As explained in the majority opinion, “We cannot indulge the facile assumption that one can forbid particular words without also running a substantial risk of suppressing ideas in the process. Indeed, governments might soon seize upon the censorship of particular words as a convenient guise for banning the expression of unpopular views.”