The Supreme Court’s Top Cases of 2012 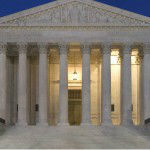 From the Affordable Care Act to immigration, the U.S. Supreme Court tackled a number of high-profile issues in 2012. This post offers a look back at some of the most important cases of the past year and how they may change the legal landscape for many more to come.

Arizona v. United States: In a split-decision, the U.S. Supreme Court upheld parts of Arizona’s controversial immigration law, while striking down others. It held that federal law preempted Sections 3, 5(C), and 6 of Arizona’s immigration law. The invalidated provisions required legal immigrants to carry legal documentation at all times; authorized state law enforcement to arrest any individual under suspicion of being an illegal alien; and made it a misdemeanor for an illegal alien to search for or hold a job in Arizona. However, the Court left Section 2(B)—widely referred to as the “show me your papers” provision—intact. The decision is expected to inform future efforts to regulate immigration at the state level.

American Tradition Partnership v. Bullock: While it was only a per curium decision, the Supreme Court’s holding solidified that the justices still stood behind Citizen’s United. It further clarified that the Court’s approval of corporate political spending applies equally to both state and local elections.

National Federation of Independent Business v. Sebelius: In the most-anticipated case of 2012, the Supreme Court upheld the individual mandate of the Patient Protection and Affordable Care Act. While the majority of the Court agreed that the individual mandate was not a proper use of Congress’s power under the Commerce Clause, they did find that it was valid under Congress’s taxing power. Although several other legal challenges are making their way through the federal courts, the landmark decision solidifies most provisions of the sweeping health care reform.

U.S. v. Jones: In one of the biggest criminal decision of the year, the Supreme Court held that attaching a GPS device to a vehicle and then using the device to monitor its movements constitutes a search under the Fourth Amendment. As such, law enforcement must obtain a warrant. The narrow opinion leaves many questions unanswered when it comes to our expectation of privacy and modern technology.

While the Supreme Court certainly made headlines in 2012, the upcoming year could be just as memorable. With decisions expected on controversial issues like same-sex marriage and affirmative action, the legacy of the Roberts court will continue to evolve.