United States v. Miller: Which Side of the Gun Debate Does It Support? 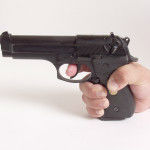 As discussed last week, legal challenges are sure to follow any new gun control legislation enacted by Congress or the states. In addition to District of Columbia v. Heller, courts will also likely look to the earlier decision of United States v. Miller.

Much like Heller, the decision offers something for both sides in the gun debate. Advocates of gun control assert that the decision supports federal firearms regulation and the notion that the Second Amendment does not extend to all types of guns. Meanwhile, gun rights supporters point to the Supreme Court’s recognition that gun ownership is essential to the “preservation of a well-regulated militia.” They also claim that the justices were not made aware that the gun at issue was commonly used by the military.

Jack Miller and Frank Layton were indicted for violating the National Firearms Act (NFA) by transporting a double barrel 12-gauge shotgun having a barrel less than 18 inches in length via interstate commerce. The NFA required certain classes of guns to be registered with the federal government and have a tax stamp affixed. The defendants challenged the constitutionality of the NFA on the grounds that it violated the Second Amendment of the U.S. Constitution.

The Supreme Court ultimately concluded that the Second Amendment did not guarantee the individual right to keep such a weapon. “In the absence of any evidence tending to show that possession or use of a ‘shotgun having a barrel of less than eighteen inches in length’ at this time has some reasonable relationship to the preservation or efficiency of a well regulated militia, we cannot say that the Second Amendment guarantees the right to keep and bear such an instrument. Certainly it is not within judicial notice that this weapon is any part of the ordinary military equipment, or that its use could contribute to the common defense,” the justices concluded.

In dicta, the Supreme Court further explored the meaning of “militia” as it applied to the Second Amendment. As explained by the Court, “The significance attributed to the term Militia appears from the debates in the Convention, the history and legislation of Colonies and States, and the writings of approved commentators. These show plainly enough that the Militia comprised all males physically capable of acting in concert for the common defense. ‘A body of citizens enrolled for military discipline.’ And further, that ordinarily when called for service these men were expected to appear bearing arms supplied by themselves and of the kind in common use at the time.”

Should gun control again reach the Supreme Court, the legal question may very well be whether assault weapons like the AR-15, which are now some of the most popular in the United States, are guns in common use under Miller or dangerous and unusual weapons under Heller.