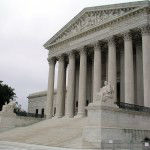 The constitutionality of President Barak Obama’s recess appointments will likely appear before the U.S. Supreme Court. However, there is a strong chance that the Court will determine that the controversy in a nonjusticiable political question.

Although the government failed to argue that the court lacked jurisdiction, the issue is unlikely to escape Chief Justice John Roberts. He has made it perfectly clear that his Court will not be an “activist” court that delves into political affairs.

In addition to relying on the seminal case of Marbury v. Madison, the justices will likely also look to Goldwater v. Carter, in which several members of Congress challenged President Jimmy Carter’s power to nullify a defense treaty.

In 1979, President Carter terminated a defense treaty with Taiwan without notifying the Senate. Senator Barry Goldwater and several other members of the Senate filed a lawsuit, challenging the constitutionality of the action. They argued that the President exceeded his powers under the U.S. Constitution by unilaterally terminating the treaty without the advice and consent of the United States Senate or the approval of both houses of Congress.

The majority ultimately vacated a court of appeals ruling that the case presented a justiciable question and remanded the case to a federal district court with directions to dismiss the complaint. Justices Lewis Powell and William Rehnquist issued two separate concurring opinions on the case.

Rehnquist, along with four other justices, believed that the case involved a political question regarding the power of the President and Congress to conduct foreign affairs matters. Meanwhile, Justice Powell argued that the case was not ripe for judicial review because Congress had not officially challenged Carter’s actions.

Despite the duel opinions, the case is largely remembered for its stance on the political question doctrine.  As Rehnquist explains, “The basic question presented by the petitioners in this case is ‘political,’ and therefore nonjusticiable because it involves the authority of the President in the conduct of our country’s foreign relations and the extent to which the Senate or the Congress is authorized to negate the action of the President.

Rehnquist also placed great weight on the fact that the Constitution is silent as to the power to nullify a treaty. “In light of the absence of any constitutional provision governing the termination of a treaty, and the fact that different termination procedures may be appropriate for different treaties…, the instant case, in my view, also ‘must surely be controlled by political standards.’”

While all of these factors suggest that President Obama’s recess appointments fall under the same category of a nonjusticiable political question, Justice Rehnquist also makes an important distinction in Goldwater v. Carter.

He notes that the lawsuit involved two co-equal braches of the government, “each of which has resources available to protect and assert its interests, resources not available to private litigants outside the judicial forum.” Given that the cases challenging President Obama’s recess appointments were brought by U.S. businesses, this may be an important distinction.