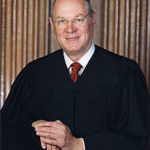 Justice Anthony Kennedy is often the deciding swing vote in key cases before the U.S. Supreme Court. As a result, he receives a lot of attention during oral arguments. Some have even characterized it as “kissing up.”

As highlighted in a recent Washington Post column, both sides frequently addressed Justice Kennedy during the two same-sex marriage arguments. The following are just a few examples:

“To go back to Justice Kennedy’s point …”

“With all due respect, Justice Kennedy …”

In many ways, the attention is warranted. In a Court comprised of four liberal judges and four conservatives, Kennedy has shown that he cannot be so easily labeled, following in the footsteps of Justice Sandra Day O’Connor. In several cases on abortion, Kennedy has sided with conservatives in upholding restrictions, such as laws criminalizing partial-birth abortion and requiring minors to obtain parental consent. Kennedy also sides with conservative on the issue of gun control, agreeing to strike down the District of Columbia’s ban on handguns in District of Colombia v. Heller.

At the same time, Kennedy has also voted with the liberal block in favor of gay rights. In fact, he authored the opinion in Romer v. Evans, invalidating a Colorado law denying homosexuals the right to pursue housing discrimination claims. He also wrote the opinion in Bowers v. Hardwick, which struck down a law criminalizing sodomy.

Predicting that Kennedy will be the deciding fifth vote in any same-sex marriage decision, court watchers were understandably focused on his remarks during oral arguments. The general consensus is that Kennedy is leaning in favor of striking down the Defense of Marriage Act (DOMA). “It seems to me there’s injury here,” he said. Kennedy also expressed concern that the federal legislation interferes with states’ right to regulate marriage.

Despite Justice Kennedy’s long track record of casting the decisive vote, recent cases remind us that all of the justices have the potential to influence a decision. Most recently, Chief Justice John Roberts surprised many by casting the crucial vote to save the Affordable Care Act.

Thus, while history may often help predict the outcome, the only legal certainty is the Court’s ultimate decision, which is not due until June.