Terry v. Ohio: The Birth of Stop and Frisk 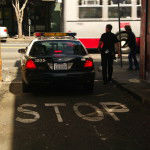 A federal court judge recently held that New York City’s stop and frisk program runs afoul of the U.S. Constitution. In addition to finding that the practice disproportionately targeted black and Hispanics in violation of the Fourteenth Amendment, the court found that many of the stops violated the prohibition against unreasonable searches and seizures. Central to the court’s Fourth Amendment analysis was the precedent established in Terry v. Ohio.

A Cleveland detective was patrolling his downtown beat when he observed Terry and two other men walking an identical route more than 24 times, while pausing to look in the same store window. Suspecting that the men were “casing a job, a stick-up,” the officer approached the men, identified himself as a policeman, and asked their names. He subsequently frisked Terry and found a pistol in his overcoat pocket. He was charged with carrying a concealed weapon.

The defense moved to suppress the weapons. While the court rejected the prosecutor’s argument that the guns had been seized during a search incident to a lawful arrest, the court admitted the weapons into evidence on the ground that the officer had cause to believe that the men were acting suspiciously, that their interrogation was warranted, and that the officer, for his own protection, had the right to pat down their outer clothing having reasonable cause to believe that they might be armed.

On appeal, the majority of the Supreme Court agreed that the evidence should be admissible. However, it flatly rejected the argument that a stop and frisk did not implicate Fourth Amendment protections against unreasonable searches and seizures.

“Whenever a police officer accosts an individual and restrains his freedom to walk away, he has ‘seized’ that person,” Justice Earl Warren wrote on behalf of the majority. He further stated that “… it is nothing less than sheer torture of the English language to suggest that a careful exploration of the outer surfaces of a person’s clothing all over his or her body in an attempt to find weapons is not a ‘search.'”

Despite the general requirement for obtaining a warrant prior to search and seizure, the Court acknowledged that the procedure is not always possible when officers must make quick decisions on the beat. Accordingly, the Court concluded:

Where a police officer observes unusual conduct which leads him reasonably to conclude in light of his experience that criminal activity may be afoot and that the persons with whom he is dealing may be armed and presently dangerous, where, in the course of investigating this behavior, he identifies himself as a policeman and makes reasonable inquiries, and where nothing in the initial stages of the encounter serves to dispel his reasonable fear for his own or others’ safety, he is entitled for the protection of himself and others in the area to conduct a carefully limited search of the outer clothing of such persons in an attempt to discover weapons which might be used to assault him.

The Court emphasized that test for assessing the reasonableness of a stop and frisk is an objective one. The subjective good faith of the officer is insufficient. The court must ask: “Would the facts available to the officer at the moment of the seizure or the search warrant a man of reasonable caution in the belief that the action taken was appropriate?”

That question may turn out to be central to the Court’s analysis of the NYPD’s stop and frisk program, should the case make it all the way to the Supreme Court.