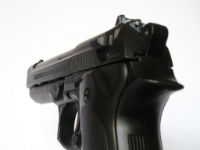 While the justices enjoy their winter recess, debate is heating up regarding whether the U.S. Supreme Court will agree to hear two Second Amendment cases. The petitions, filed by the National Rifle Association, challenge the very definition of what it means to “bear” arms under the U.S. Constitution.

While many would like the U.S. Supreme Court to bring clarity to the gun debate, it is unclear if the justices will decide to intervene. The Court last considered the right to bear arms in McDonald v. Chicago, 561 U.S. 742 (2010), and has not granted any new Second Amendment cases since the shootings in Newtown, Connecticut renewed calls for further gun restrictions.

In McDonald, the majority held that the Fourteenth Amendment makes the Second Amendment right to keep and bear arms for the purpose of self-defense applicable to the states. As explained by Justice Samuel A. Alito Jr., “It is clear that the Framers . . . counted the right to keep and bear arms among those fundamental rights necessary to our system of ordered liberty.” However, the justices were bitterly split 5-4, just as they were in the landmark case of District of Columbia v. Heller, 554 U.S. 570 (2008), in which the Court first ruled that the Second Amendment guaranteed citizens the right to keep a gun in their home for self-defense.

This time around, the cases revolve around gun laws that restrict the rights of individuals between the ages of 18 and 20 years old to carry firearms. NRA v. Bureau of Alcohol, Tobacco and Firearms involves a federal law, while NRA v. McCraw involves a Texas state law.

As Lyle Denniston accurately notes, the cases come down to the extent of a citizen’s right to bear arms outside the home. While Heller and McDonald squarely addressed the right to “keep” arms inside the home, the issue of what it means to “bear” arms has not been fully considered by the Court.

As argued by the NRA in one of the briefs, “The explicit guarantee of the right to ‘bear’ arms would mean nothing, if it did not protect the right to ‘bear’ arms outside of the home, where the Amendment already guarantees that they may be ‘kept.’  The most fundamental canons of construction forbid any interpretation that would discard this language as meaningless surplus.”

In both lower court decisions, the courts suggested that some individuals might not be entitled to the full guarantees of the Second Amendment due to their age. This may be the hook the Court needs to weigh in, or it may decide to again pass on the controversial issue.

The justices are scheduled to take up the petitions later this month. However, even if they do agree to consider them, the cases would likely not be heard until the October 2014 Term. We will keep you posted.