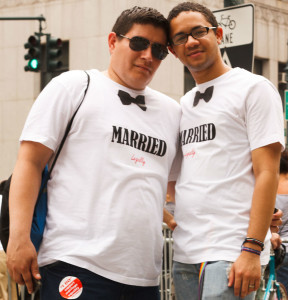 The U.S. Supreme Court may finally address the Constitutional right to same-sex marriage when its next term begins in October. Petitions challenging state laws in Utah, Virginia, and Oklahoma await the justices’ consideration.

If the justices agree to grant certiorari, same-sex marriage will become the defining issue for the Roberts Court. In 2013, the Court made history when it struck down the Defense of Marriage Act (DOMA) in United States v. Windsor, 570 U.S. __ (2013).

By a vote of 5-4, the majority held that DOMA — which defined “marriage” for all purposes under federal law as only between one man and one woman—violated “basic due process and equal protection principles applicable to the Federal Government.” As Justice Kennedy further explained:

DOMA’s principal effect is to identify a subset of state-sanctioned marriages and make them unequal. The principal purpose is to impose inequality, not for other reasons like governmental efficiency… By creating two contradictory marriage regimes within the same State, DOMA forces same-sex couples to live as married for the purpose of state law but unmarried for the purpose of federal law, thus diminishing the stability and predictability of basic personal relations the State has found it proper to acknowledge and protect.

Over the past year, state and federal courts around the country have applied the Windsor decision to state legal challenges involving same-sex marriage. While most have ruled that the failure to legally recognize such unions violates the U.S. Constitution, the Supreme Court must provide the definitive answer.

: The lawsuit involves an Oklahoma constitutional amendment, which was approved by voters in 2004. It prohibits same-sex marriages within the state as well as the legal recognition of such unions celebrated elsewhere. After the Court of Appeals for the Tenth Circuit recently ruled the ban was unconstitutional, one of the defendants, an Oklahoma county clerk, asked the Supreme Court to intervene. The question presented in the petition for writ of certiorari is “[w]hether the Due Process Clause and the Equal Protection Clause of the Fourteenth Amendment to the United States Constitution forbid the State of Oklahoma from defining marriage as the union of a man and a woman. “

Both sides in the dispute over Utah’s same-sex marriage ban are urging the Supreme Court to grant review. The Tenth Circuit was the first appeals court to strike down a state law prohibiting same-sex marriage in the wake of Windsor; it ruled that “[a] state may not deny the issuance of a marriage license to two persons, or refuse to recognize their marriage, based solely upon the sex of the persons in the marriage union.” The Supreme Court intervened in the case earlier this year when it issued temporary orders staying lower court rulings pending further appeal. Now that the full case is finally before the justices, the question presented is “[w]hether the Fourteenth Amendment to the United States Constitution prohibits a state from defining or recognizing marriage only as the legal union between a man and a woman.” Thus, the case would require the Court to address whether states have the authority to forbid same-sex couples to marry as well as whether they have the power to refuse to recognize same-sex marriages performed in states where it is legal.

: The state of Virginia could again be at the center of a historical Supreme Court decision on marriage. In Loving v. Virginia, the Court invalidated a state law prohibiting interracial marriage. In the same-sex marriage petition, the question presented is “[w]hether Virginia violates the Due Process and Equal Protection Clauses by denying the right of marriage to same-sex couples and by refusing to recognize same-sex marriages lawfully performed outside of Virginia.”

Should the Court decide to revisit the issue of same-sex marriage, it will certainly have options. However, we will have to wait and see which case or cases the justices agree to consider, if any.