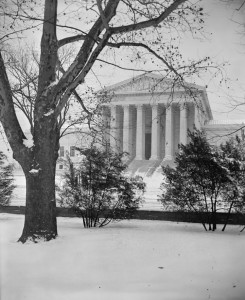 Under the First Amendment, the government cannot abridge “the right of the people peaceably to assemble.” So long as they remain non-violent, protestors are free to gather and speak their minds.

The Facts of the Case De Jonge v. Oregon

In 1936, the state of Oregon enforced a “criminal syndicalism” law, which prohibited advocacy of “any unlawful acts or methods as a means of accomplishing or effecting industrial or political change or revolution.” Dirk De Jonge was indicted under the law for assisting in the organization of a meeting that was called under the auspices of the Communist Party, an organization deemed to advocate criminal syndicalism.

In his defense, De Jonge argued that the meeting was public and orderly and was held for a lawful purpose. He further maintained that while the Communist Party called the meeting, neither criminal syndicalism nor any unlawful conduct was taught or advocated at the meeting by him or anyone else. He was ultimately found guilty as charged and was sentenced to imprisonment for seven years.

The U.S. Supreme Court struck down the Oregon law and reversed his conviction, finding that “the holding of meetings for peaceable political action cannot be proscribed.”

In reaching its decision, the Court noted, “Freedom of speech and of the press are fundamental rights which are safeguarded by the due process clause of the Fourteenth Amendment of the Federal Constitution… The right of peaceable assembly is a right cognate to those of free speech and free press and is equally fundamental.”

The Court acknowledged that First Amendment rights may be abused by using speech or press or assembly in order to incite to violence and crime and that the government may pass laws to protect themselves against that abuse. However, it also highlighted that “the rights themselves must not be curtailed.”

“The greater the importance of safeguarding the community from incitements to the overthrow of our institutions by force and violence, the more imperative is the need to preserve inviolate the constitutional rights of free speech, free press and free assembly in order to maintain the opportunity for free political discussion, to the end that government may be responsive to the will of the people and that changes, if desired, may be obtained by peaceful means. Therein lies the security of the Republic, the very foundation of constitutional government,” the Court explained.