Plumhoff v. Rickard: When Is Police Use of Deadly Force Justified? 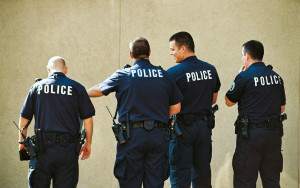 In Plumhoff v. Rickard, the U.S. Supreme Court addressed what type of law enforcement conduct rises to the level of “excessive force in violation of the Constitution. The 2014 decision may play a role in whether the Ferguson, Missouri police officer that shot and killed unarmed teenager Michael Brown is ultimately prosecuted and convicted.

Following a traffic stop, Donald Rickard led police officers on a high-speed car chase until he eventually spun out into a parking lot. Although his vehicle was cornered by a patrol car, Rickard continued to press the accelerator. In response, an officer fired three shots into Rickard’s car. However, he was able to drive away, narrowly missing an officer in the process. Officers fired 12 more shots as Rickard sped away, striking him and his passenger, both of whom died from their injuries.

Rickard’s minor daughter filed a 42 U. S. C. §1983 action, alleging that the officers used excessive force, violating the 4th and 14th Amendments. The suit specifically alleged that Fourth Amendment did not allow the officers to use deadly force to terminate the chase, and that, even if they were permitted to fire their weapons, they went too far when they fired as many rounds as they did. The District Court denied the officers’ motion for summary judgment based on qualified immunity after finding that their conduct violated the Fourth Amendment and was contrary to clearly established law at the time in question. The Sixth Circuit Court of Appeals affirmed.

Claims of excessive are governed by the Fourth Amendment’s “reasonableness” standard, per the Court’s decision in Graham v. Connor. This standard “requires a careful balancing of the nature and quality of the intrusion on the individual’s Fourth Amendment interests against the countervailing governmental interests at stake.” Given that officers are frequently required to make split second decisions, courts are required to analyze this question from the perspective “of a reasonable officer on the scene, rather than with the 20/20 vision of hindsight.” Id.

In a unanimous decision, the justices concluded that the officers’ conduct did not violate the Fourth Amendment. With regard to the use of deadly force, the court concluded that the officers actions were reasonable, citing Scott v. Harris, in which the Court held that a “police officer’s attempt to terminate a dangerous high-speed car chase that threatens the lives of innocent bystanders does not violate the Fourth Amendment, even when it places the fleeing motorist at risk of serious injury or death.”

In this case, the Court noted that “Rickard’s outrageously reckless driving—which lasted more than five minutes, exceeded 100 miles per hour, and included the passing of more than two dozen other motorists—posed a grave public safety risk, and the record conclusively disproves that the chase was over when Rickard’s car came to a temporary standstill and officers began shooting. Under the circumstances when the shots were fired, all that a reasonable officer could have concluded from Rickard’s conduct was that he was intent on resuming his flight, which would again pose a threat to others on the road.”

The justices also concluded that the officers did not fire more shots than necessary to end the public safety risk. As explained by the Court, it “stands to reason that, if police officers are justified in firing at a suspect in order to end a severe threat to public safety, the officers need not stop shooting until the threat has ended.”