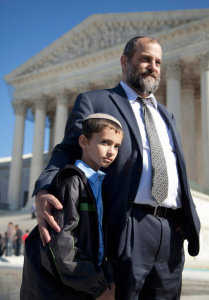 The U.S. Supreme Court is set to decide an important U.S. foreign relations case next term. Zivotofsky v. Kerry involves whether the power to recognize foreign states and governments is exclusive to the President; or, as in this case, Congress also has the power to determine whether Jerusalem is considered part of Israel.

For purposes of the registration of birth, certification of nationality, or issuance of a passport of a United States citizen born in the city of Jerusalem, the Secretary shall, upon the request of the citizen or the citizen’s legal guardian, record the place of birth as Israel.

The parents of Menachem B. Zivotofsky, who was born in Jerusalem in 2002, filed suit to enforce the law. At the time he signed the law, President George W. Bush stated that he would not follow the law because it “impermissibly interferes with the President’s constitutional authority to conduct the Nation’s foreign affairs and to supervise the unitary executive branch.” President Barack Obama has adopted the same position based on the longstanding U.S. foreign policy not to recognize the sovereignty of any state over Jerusalem.

The justices previously addressed this case in 2012. They held that the constitutionality of Section 214(d) is not a “political question” but rather an issue that “the Judiciary is competent to resolve.” The Supreme Court remanded the case back to the United States Court of Appeals for the District of Columbia Circuit.

The appeals court held that held that “the President exclusively holds the power to determine whether to recognize a foreign sovereign.” It noted, however, that the issue of the President’s exclusive power has never been decided by the Supreme Court.

The Supreme Court will now decide if the statute is constitutional. On appeal, the specific question before the Court is:

Whether a federal statute that directs the Secretary of State, on request, to record the birthplace of an American citizen born in Jerusalem as born in “Israel” on a Consular Report of Birth Abroad and on a United States passport is unconstitutional on the ground that the statute “impermissibly infringes on the President’s exercise of the recognition power reposing exclusively in him.”

In its brief, the Department of Justice argued that the long-standing dispute over Jerusalem must be resolved through diplomatic negotiation. Accordingly, the decision will not only address the balance of power between Congress and the Executive Branch, but also address the tension between Israel and Palestine.