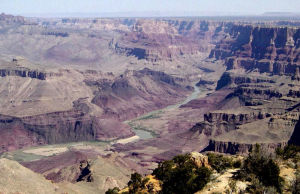 In 2000, Arizona voters approved an amendment to the state constitution, which created the Independent Redistricting Commission, whose purpose is to “provide for the redistricting of congressional and state legislative districts.” Previously, the Legislature had controlled the redistricting process, subject to the governor’s veto.

After the Redistricting Commission adopted its first plan, the Legislature filed suit, alleging that that Arizona’s use of a commission to adopt congressional districts violates Article I, § 4 of the United States Constitution, which states that “the times, places and manner of holding elections for senators and representatives shall be prescribed in each state by the legislature thereof.” The lawmakers specifically alleged that the creation of the independent commission violates the Elections Clause because it “divests the Legislature of its authority” over redistricting legislation.

A three-judge district court found Arizona’s redistricting commission was legal, reasoning that voters stepped into the shoes of the Legislature when they approved the amendment to the state’s constitution.

Under the U.S. Constitution, the number of people who serve in the House of Representatives from each state is determined by the state’s population. After the U.S. Census is conducted every ten years, the states must evaluate their state congressional districts and redistribute the population as evenly as possible. The redistricting process is often controversial, as the newly drawn maps have the potential to influence the political landscape for years to come.

While the U.S. Supreme Court mandates that districts be drawn to be substantially equal in population in accordance with the “one man, one vote principle,” the power to redraw district lines within the states is delegated to the states themselves. While this process has generally been in the hands of state legislatures, several states have formed redistricting commissions in an effort to prevent politicians from redrawing the maps in their favor.

The core issue before the Court is whether the Elections Clause of the United States Constitution and 2 U. S. C. § 2a(c) permit Arizona’s use of a commission to adopt congressional districts. However, the justices also asked the parties to address a jurisdictional issue — whether the Arizona Legislature has standing to bring this suit. Accordingly, the Court could dispose of the case without addressing redistricting.

If the Court does reach the merits, the decision has the potential to have widespread implications. California also uses a non-partisan commission to redraw its Congressional districts and reforms efforts are underway in other states.

As noted by the attorneys for the Arizona Commission, “If the Arizona Legislature prevails, only state legislatures would be permitted to draw congressional districts, effectively ending independent congressional redistricting that has been an important reform in Arizona and elsewhere.”

For more on Congressional redistricting see, “Stand Up and Be Counted: How Population Shifts Impact New Jersey Elections” and watch, “What is Redistricting in the United States.”