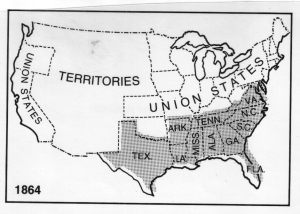 Texas, like many states, allows drivers to choose from a variety of license-plate designs, including a “specialty” plate containing a unique design or message. In 2009, the Sons of Confederate Veterans proposed a specialty-plate design featuring the Sons of Confederate Veterans’ logo. In response to concerns from the public, the Department of Motor Vehicles Board rejected the design.

The Sons of Confederate Veterans filed suit, alleging that the Board violated the First Amendment by rejecting their proposed license-plate design. Texas responded that the government-speech doctrine allows a State to choose the messages and symbols that will appear on its specialty license plates. It further argued that the Board’s decision to reject the Sons of Confederate Veterans’ license-plate proposal was not unconstitutional “viewpoint discrimination.”

By a vote of 2-1, the Fifth Circuit Court of Appeals ruled that Texas engaged in impermissible “viewpoint discrimination” by rejecting the plaintiffs’ license-plate proposal. “By rejecting the plate because it was offensive, the board discriminated against Texas SCV’s view that the Confederate flag is a symbol of sacrifice, independence and Southern heritage,” the majority said.

The Supreme Court will consider two issues that have divided the circuit courts. The first is whether the messages and images that appear on state-issued specialty license plates qualify as government speech immune from any requirement of viewpoint neutrality. While the Sixth Circuit Court of Appeals has answered in the affirmative, all of the other appeals courts have ruled “no.” They have further ruled that a state cannot issue specialty license plates unless it maintains viewpoint neutrality among proposed license-plate designs.

The second question is whether Texas engaged in “viewpoint discrimination” by rejecting the license-plate design proposed by the Sons of Confederate Veterans, when Texas has not issued any license plate that portrays the confederacy or the confederate battle flag in a negative or critical light.

In its petition for writ of certiorari, the state of Texas argued that the Fifth Circuit’s ruling would have “untenable consequences.” It argued that “[t]he majority opinion did not explain how its ‘no viewpoint discrimination’ rule could allow Texas to continue issuing these specialty plates without also offering plates that promote child abuse, drunk driving, animal cruelty, and messages opposing the State Children’s Health Insurance Program.”

The decision is expected to have consequences outside the state of Texas. In North Carolina, a similar lawsuit is ongoing regarding whether the state can authorize a “Choose Life” license-plate while denying abortion rights groups the ability to have their own plate.