Legalized Marijuana in Colorado May Go Up in Smoke 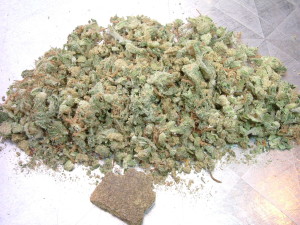 Nebraska and Oklahoma are asking the Supreme Court to declare that Colorado violated the U.S. Constitution when it legalized marijuana.

The suit, which evokes the Court’s original jurisdiction over disputes between states, specifically alleges that the state’s marijuana law violates the Supremacy Clause by “establish[ing] its own policy that is directly counter to federal policy against trafficking in controlled substances.”

In 2012, Colorado voters approved a ballot measure that legalized marijuana for recreational use. Under Amendment 64, the state not only legalized the use of marijuana for people over 21 years of age authorized, but also authorized the commercialization of marijuana cultivation, distribution, and sale. Although the law prohibits marijuana purchasers from taking the drug across state lines, neighboring states maintain that drug arrests have skyrocketed since the law took effect.

Despite the efforts of several states to decriminalize marijuana possession, it is still illegal under federal law. In fact, marijuana remains a Class I substance under the Controlled Substances Act, which is reserved for drugs with “high potential for abuse, no accepted medical use, and no accepted safety for use in medically supervised treatment.”

While the law is still on the books, enforcement has changed in recent years. After Colorado and Washington legalized the production, distribution and possession of marijuana, the Department of Justice released guidance stating that it will not challenge state laws authorizing small amounts of marijuana so long as there are robust controls and procedures in place.

The Supremacy Clause of the Constitution states that “[t]his Constitution, and the Laws of the United States which shall be made in Pursuance thereof . . . shall be the supreme Law of the Land . . .any Thing in the Constitution or Laws of any State to the Contrary notwithstanding.” In basic terms, federal laws generally trump state laws and even state constitutions.

In this case, Nebraska and Oklahoma contend that Colorado’s legalization of marijuana directly conflicts with federal law and undermines express federal priorities in the area of drug control and enforcement.

“The state of Colorado has created a dangerous gap in the federal drug control system enacted by the United States Congress,” the complaint asserts. “Marijuana flows from this gap into neighboring states, undermining plaintiff states’ own marijuana bans, draining their treasuries, and placing stress on their criminal justice systems.”

In response, the state of Colorado maintains that the suit is without merit and the true issue is the non-enforcement of federal laws regarding marijuana. In a press statement, “Colorado Attorney General John Suthers stated, “The plaintiffs’ primary grievance stems from nonenforcement of federal laws regarding marijuana, as opposed to choices made by the voters of Colorado.”

The Supreme Court has not yet accepted the case. As previously explained on this blog, original suits are filed directly with the U.S. Supreme Court. Once the justices accept the case, they often appoint a “special master” who is tasked with the evaluating the facts and legal arguments asserted by the parties. After receiving the special master’s report, the Court generally renders a final decision. We will be closely tracking the status of this case and encourage you to check back here for updates.