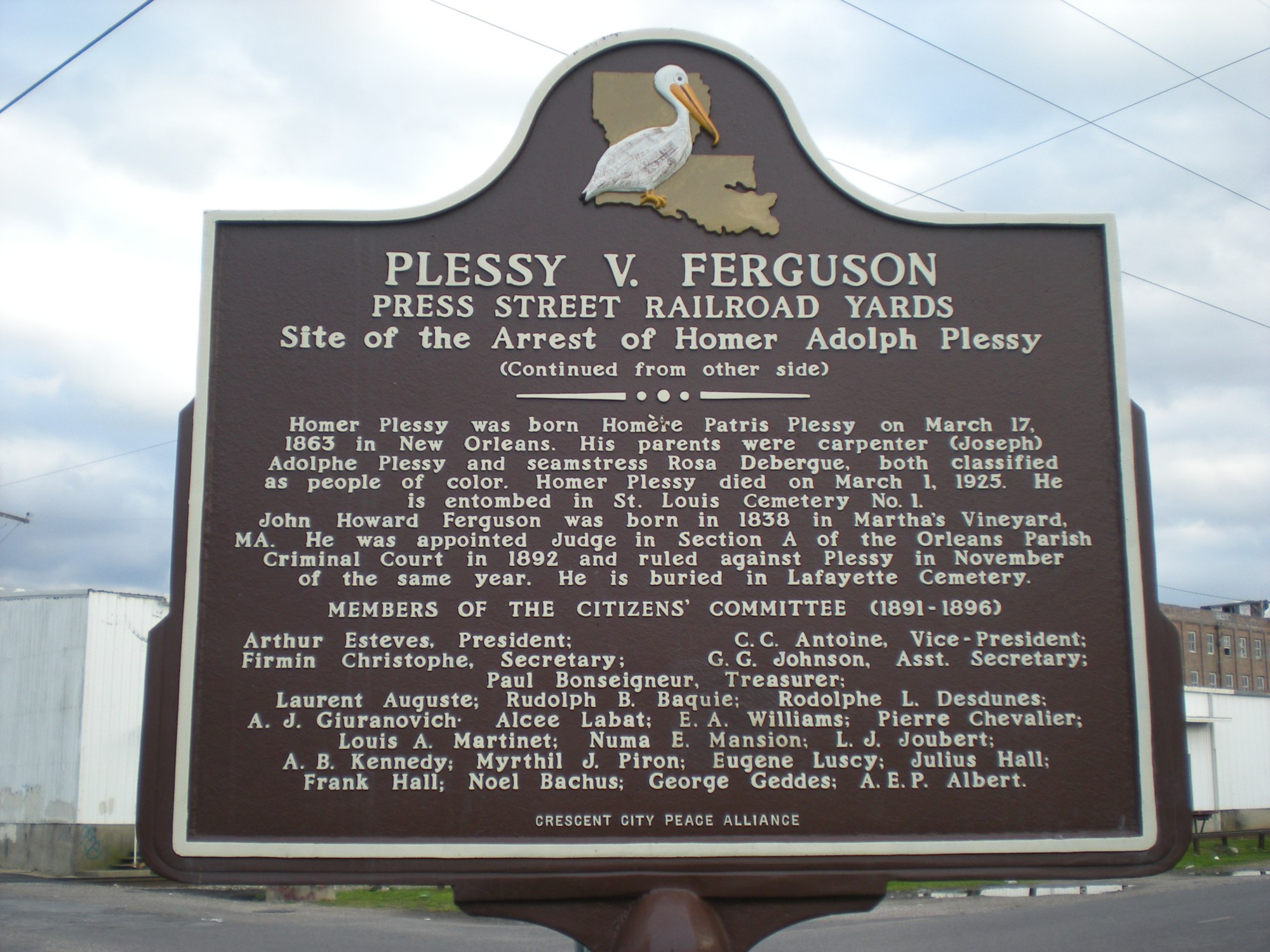 In 1896, the U.S. Supreme Court ruled that state laws establishing racial segregation did not violate the Fourteenth Amendment of the U.S. Constitution in the Plessy v. Ferguson case.

The state of Louisiana enacted a law requiring railway companies carrying passengers to provide equal, but separate, accommodations for the white and black passengers, by providing two or more passenger coaches for each passenger train, or by dividing the passenger coaches by a partition so as to secure separate accommodations; and providing that no person shall be permitted to occupy seats in coaches other than the ones assigned to them, on account of the race they belong to.

Homer Adolph Plessy, who was seven eighths Caucasian and one eighth African American, boarded a “whites only” car with the intent to challenge the law. When he was asked to vacate, Plessy refused and was subsequently arrested. He later filed suit, alleging that Louisiana’s Separate Car Act violated the Thirteenth and Fourteenth Amendments to the U.S. Constitution.

The Supreme Court upheld the constitutionality of the law, resting its decision on the principle of “separate but equal.” The opinion does not use the exact phrase, but concluded that racial segregation was legal so long as public facilities were equal.

We consider the underlying fallacy of the plaintiff’s argument to consist in the assumption that the enforced separation of the two races stamps the colored race with a badge of inferiority. If this be so, it is not by reason of anything found in the act, but solely because the colored race chooses to put that construction upon it.

While the Court acknowledged that the Fourteenth Amendment was intended to ensure equality among races, it found “in the nature of things it could not have been intended to abolish distinctions based upon color, or to enforce social, as distinguished from political equality, or a commingling of the two races unsatisfactory to either.”

With regard to reasonableness, the Court concluded that the state “is at liberty to act with reference to the established usages, customs, and traditions of the people, and with a view to the promotion of their comfort and the preservation of the public peace and good order.”

Justice John Marshall Harlan was the Court’s lone dissenter, warning his colleagues that their decision would one day be revered in the same category as Dred Scott v. Sandford, 60 U.S. 393 (1857), which denied citizenship to African Americans. He argued:

[I]n view of the constitution, in the eye of the law, there is in this country no superior, dominant, ruling class of citizens. There is no caste here. Our constitution is color-blind, and neither knows nor tolerates classes among citizens. In respect of civil rights, all citizens are equal before the law. The humblest is the peer of the most powerful. The law regards man as man, and takes no account of his surroundings or of his color when his civil rights as guaranteed by the supreme law of the land are involved.