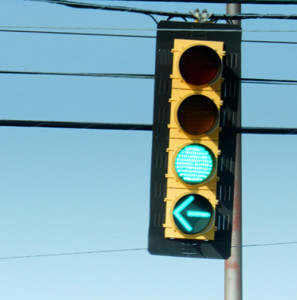 The U.S. Supreme Court recently ruled that absent reasonable suspicion, police extension of a traffic stop in order to conduct a dog sniff violates the Constitution’s prohibition of unreasonable seizures.

Officer Struble pulled over Denny Rodriguez for driving on a highway shoulder, a violation of Nebraska law. After Struble attended to everything relating to the stop, including checking the driver’s licenses of Rodriguez and his passenger and issuing a warning for the traffic offense, he asked Rodriguez for permission to walk his police dog around the vehicle. When Rodriguez refused, Struble detained him until a second officer arrived. Struble then retrieved his dog, who alerted to the presence of drugs in the vehicle. Seven or eight minutes elapsed from the time Struble issued the written warning until the dog detected the drugs.

Rodriguez was indicted on federal drug charges. He moved to suppress the evidence seized from his car on the ground, among others, that Struble had prolonged the traffic stop without reasonable suspicion in order to conduct the dog sniff. The district court held that under Eighth Circuit precedent, extension of the stop by “seven to eight minutes” for the dog sniff was only a de minimis intrusion on Rodriguez’s Fourth Amendment rights and was therefore permissible. The appeals court affirmed.

The majority disagreed with the Eighth Circuit, holding that a police stop exceeding the time needed to handle the matter for which the stop was made violates the Constitution’s shield against unreasonable seizures. Justice Ruth Bader Ginsburg wrote the majority opinion, which was joined by Chief Justice John Roberts and Justices Antonin Scalia, Stephen Breyer, Sonia Sotomayor and Elena Kagan.

As Justice Ginsburg explained, the majority decision adheres to the precedent established in Illinois v. Caballes, under which a “seizure justified only by a police-observed traffic violation, becomes unlawful if it is prolonged beyond the time reasonably required to complete the mission of issuing a ticket for the violation.”

The majority acknowledged that the Fourth Amendment tolerates certain unrelated investigations that do not lengthen the roadside detention, such as checking the driver’s license, determining whether there are outstanding warrants against the driver, and inspecting the automobile’s registration and proof of insurance. However, it noted that a dog sniff is unrelated to traffic safety; rather, it is aimed at detecting evidence of criminal wrongdoing. “Lacking the same close connection to roadway safety as the ordinary inquiries, a dog sniff is not fairly characterized as part of the officer’s traffic mission,” Justice Ginsburg stated.

The Court further rejected the government’s argument that that “by completing all traffic-related tasks expeditiously, an officer can earn bonus time to pursue an unrelated criminal investigation.” As the Court makes clear, “[A] traffic stop ‘prolonged beyond’ the time in fact needed for the officer to complete his traffic-based inquiries is “unlawful.”