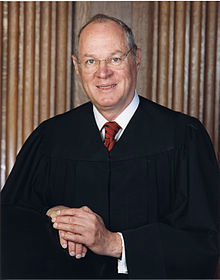 Oral arguments lasted only a few short hours, but the Supreme Court will likely debate the same-sex marriage cases for the next two months. Not surprisingly, Justice Anthony Kennedy holds the likely swing vote that could change history in regards to same-sex marriage.

In a Court comprised of four liberal judges and four conservatives, Justice Anthony Kennedy is more difficult to pin down on social issues. While Kennedy has consistently sided with the conservative block on cases involving abortion rights, he has also traditionally voted with the liberals in cases involving gay rights. In fact, he authored the opinion in Romer v. Evans, which invalidated a Colorado law denying homosexuals the right to pursue housing discrimination claims, as well as the opinion in Bowers v. Hardwick, which struck down a law criminalizing sodomy.

Most recently, Justice Anthony Kennedy cast the decisive vote in United States v. Windsor, which struck down the Defense of Marriage Act (DOMA), a federal law defining marriage as exclusively between one man and one woman. He also wrote the majority opinion, which stated:

DOMA’s principal effect is to identify a subset of state-sanctioned marriages and make them unequal. The principal purpose is to impose inequality, not for other reasons like governmental efficiency… By creating two contradictory marriage regimes within the same State, DOMA forces same-sex couples to live as married for the purpose of state law but unmarried for the purpose of federal law, thus diminishing the stability and predictability of basic personal relations the State has found it proper to acknowledge and protect.

Given Justice Anthony Kennedy’s prior decisions, it may appear that same-sex marriage proponents can start celebrating. However, Kennedy’s support for gay and lesbian rights is tempered by his strong support for states’ rights. Throughout his time on the Court, Justice Anthony Kennedy has also authored many opinions that favor allowing states to govern how they see fit.

These competing interests were evident during oral arguments. “Same-sex couples say, of course, ‘We understand the nobility and the sacredness of marriage. We know we can’t procreate, but we want the other attributes of it in order to show that we, too, have a dignity that can be fulfilled,’” he noted in an exchange with counsel arguing in favor of same-sex marriage bans. However, with regard to whether states should be required to recognize same-sex marriages legally performed in other states, Justice Anthony Kennedy asked why one state should “have to yield” to another.

Many legal experts believe that Justice Anthony Kennedy may be leaning in favor of legalizing same-sex marriage throughout the country. However, we will not learn Justice Kennedy’s final vote until the Court’s releases its decision, which is not due until June.