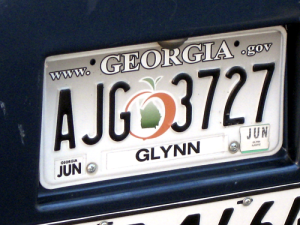 In Fletcher v. Peck, 10 U.S. 87 (1810), the Marshall Court ruled that an act of the Georgia State legislature that nullified a prior land grant they passed violated the U.S. Constitution.

It was the first case in which the U. S. Supreme Court held that a state law violated the federal Constitution.

The case stems from a property dispute over the Yazoo lands, Native American territory claimed by the State of Georgia. In 1795, the Georgia legislature divided the property into four tracts and sold it to four companies. It was later revealed that the lawmakers who had approved the Yazoo Land Act of 1795 were paid bribes for their votes. After the next election, the new legislature passed a bill repealing the Yazoo Land Act and invalidating the transactions.

The defendant in the case, John Peck, acquired land that was granted under the Yazoo Land Act. Several years later, he sold the land to Robert Fletcher, attesting that he held clear title to the property. Fletcher later filed suit for breach of contract, alleging that since the original sale of the land had been declared null and void, Peck lacked the authority to sell the land.

Article I, section 10, clause 1 of the U.S. Constitution (also known as the “Contracts Clause”) states:

No State shall enter into any Treaty, Alliance, or Confederation; grant Letters of Marque and Reprisal; coin Money; emit Bills of Credit; make any Thing but gold and silver Coin a Tender in Payment of Debts; pass any Bill of Attainder, ex post facto Law, or Law impairing the Obligation of Contracts, or grant any Title of Nobility.

The specific section of the Constitution was enacted to prohibit state governments from giving preferential treatment to wealthy and influential citizens through legislation, a practice that was common at the time.

In a unanimous decision, the Supreme Court held that the law repealing the Yazoo Land Act was unconstitutional because the Georgia legislature lacked the authority to invalidate a binding legal contract, even if it had been tainted by bribery.

Given that this was the first time the Court struck down a state law, Chief Justice John Marshall treaded carefully. He wrote:

It is not intended to speak with disrespect of the legislature of Georgia, or of its acts. Far from it. The question is a general question, and is treated as one. For although such powerful objections to a legislative grant, as are alleged against this, may not again exist, yet the principle, on which alone this rescinding act is to be supported, may be applied to every case to which it shall be the will of any legislature to apply it. The principle is this; that a legislature may, by its own act, devest the vested estate of any man whatever, for reasons which shall, by itself, be deemed sufficient.

In reaching its decision, the Court made a clear distinction between laws enacted by the state legislature and contracts executed by the same body. On the one hand, lawmakers are free to undue laws passed by their predecessors. “One legislature is competent to repeal any act which a former legislature was competent to pass; and that one legislature cannot abridge the powers of a succeeding legislature,” Chief Justice Marshall explained.

However, when the law is a contract by nature on which other parties have come to rely, the legislature does not have the same authority. Citing the Contracts Clause’s prohibition against passing laws that impair the obligation of contracts, the Court expressly held that states are cannot use their legislative power to nullify contracts or grants made by prior legislative acts.

In so ruling, the Court reasoned that the provision applies equally to contracts to which the state is a party. Chief Justice Marshall wrote: “Is the clause to be considered as inhibiting the state from impairing the obligation of contracts between two individuals, but as excluding from that inhibition contracts made with itself? The words themselves contain no such distinction. They are general, and are applicable to contracts of every description.”

In light of the above, the Court concluded:

It is, then, the unanimous opinion of the court, that, in this case, the estate having passed into the hands of a purchaser for a valuable consideration, without notice, the state of Georgia was restrained, either by general principles which are common to our free institutions, or by the particular provisions of the constitution of the United States, from passing a law whereby the estate of the plaintiff in the premises so purchased could be constitutionally and legally impaired and rendered null and void.