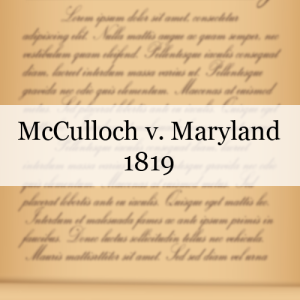 In McCulloch v. Maryland, the U.S. Supreme Court held that Congress has broad discretionary authority to implement the powers enumerated in the Constitution under the Necessary and Proper Clause.

McCulloch v. Maryland, 17 U.S. 316 (1819) is regarded as one of Chief Justice John Marshall’s most influential opinions.

In 1816, Congress passed legislation establishing the Second Bank of the United States. Because it was a depository of federal funds and authorized to issue notes, many states viewed the national bank as unfair competition and questioned its constitutionality. When state banks began to fail during the depression of 1818, the State of Maryland passed a law that imposed taxes on all banks not chartered in the state. The Second National Bank was the only one.

When the Baltimore branch of the Second National Bank refused to pay the taxes, the state of Maryland filed a suit against James W. McCulloch, the bank’s cashier. In the lawsuit that followed, he argued that the tax was unconstitutional. Maryland’s highest court ruled that the tax was valid, and McCulloch appealed to the U.S. Supreme Court. The issues before the justices were whether Congress had the power to establish a bank and whether the Maryland tax law violated the U.S. Constitution.

The Congress shall have Power … To make all Laws which shall be necessary and proper for carrying into Execution the foregoing Powers, and all other Powers vested by this Constitution in the Government of the United States, or in any Department or Officer thereof.

The Supremacy Clause, which is found in Article 6, Clause 2, states:

In a decision that continues to resonate today, the unanimous Court held that the Congress was authorized to establish the Bank of the United States and that the Maryland tax was unconstitutional. Chief Justice John Marshall authored the Court’s opinion.

The Necessary and Proper Clause

With regard to the authority of Congress, the Court recognized the legislative branch’s broad discretionary power to implement the powers enumerated in the Constitution, noting that there was nothing in the Constitution that excluded incidental or implied powers.

The Court further held that since the authority to create a bank was related to the enumerated powers to regulate interstate commerce, collect taxes, and borrow money, the act was deemed constitutional. Chief Justice Marshall wrote:

Although, among the enumerated powers of Government, we do not find the word ‘bank’ or ‘incorporation,’ we find the great powers, to lay and collect taxes; to borrow money; to regulate commerce; to declare and conduct a war; and to raise and support armies and navies. The sword and the purse, all the external relations, and no inconsiderable portion of the industry of the nation are entrusted [sic] to its Government.

The Court next turned to Maryland’s ability to tax the bank, ultimately finding that its actions violated the Supremacy Clause of Article VI of the Constitution. As Chief Justice Marshall explained, “The Government of the Union, though limited in its powers, is supreme within its sphere of action, and its laws, when made in pursuance of the Constitution, form the supreme law of the land.”

Because “the power to tax is the power to destroy,” the Court held that the state of Maryland had impermissibly interfered with the law of the land. As he further stated, “The States have no power, by taxation or otherwise, to retard, impede, burthen, or in any manner control the operations of the constitutional laws enacted by Congress to carry into effect the powers vested in the national Government.”

Finally, Chief Justice Marshall confirmed the inferior status of the states in relation to the federal government, an issue that had been questioned by lawyers for the state of Maryland. He wrote, “The Government of the Union then (whatever may be the influence of this fact on the case) is, emphatically and truly, a Government of the people. In form and in substance, it emanates from them. Its powers are granted by them, and are to be exercised directly on them, and for their benefit.”