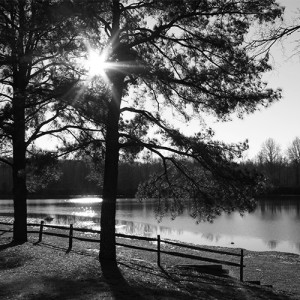 In Martin v. Hunter’s Lessee, 14 U.S. 304 (1816), the U.S. Supreme Court first asserted its authority to overrule a state court decision regarding an issue of federal law.

The Court’s landmark decision was rooted in the Court’s appellate jurisdiction conferred under Article III of the U.S. Constitution, as well as the Supremacy Clause.

The dispute revolved around the ownership of land in Virginia known as the Northern Neck Proprietary, which was originally owned by Lord Fairfax. The state of Virginia seized the land from Fairfax, a British loyalist, during the Revolutionary War and transferred a portion of it to David Hunter. Pursuant to a treaty to end the war, the United States agreed to protect land owned by British loyalists like Fairfax. Thomas Martin, who inherited the land from Fairfax, filed suit in a Virginia state court to eject Hunter from his tract of land. The Virginia court ruled in favor of Martin, but the Virginia Court of Appeals reversed. On appeal to the U.S. Supreme Court, the justices held that Martin was the legal property owner under the treaty executed with Britain.

Nonetheless, the Virginia Court of Appeals refused to obey the Supreme Court’s ruling. It held:

The Supreme Court’s jurisdiction is set forth in Article III of the Constitution. Pursuant to Section 1, “The judicial power of the United States shall be vested in one supreme court, and in such other inferior courts as the congress may, from time to time, ordain and establish.”

The judicial power shall extend to all cases in law or equity, arising under this constitution, the laws of the United States, and the treaties made, or which shall be made, under their authority; to all cases affecting ambassadors, other public ministers and consuls; to all cases of admiralty and maritime jurisdiction; to controversies to which the United States shall be a party; to controversies between two or more states; between a state and citizens of another state; between citizens of different states; between citizens of the same state, claiming lands under the grants of different states; and between a state or the citizens thereof, and foreign states, citizens, or subjects.

Finally, Article III establishes that “in all cases affecting ambassadors, other public ministers and consuls, and those in which a state shall be a party, the supreme court shall have original jurisdiction. In all the other cases before mentioned the supreme court shall have appellate jurisdiction, both as to law and fact, with such exceptions, and under such regulations, as the congress shall make.”

The Court’s decision cited both the text and the spirit of the Constitution. Justice Story explained:

On the whole, the court are of opinion, that the appellate power of the United States does extend to cases pending in the state courts; and that the 25th section of the judiciary act, which authorizes the exercise of this jurisdiction in the specified cases, by a writ of error, is supported by the letter and spirit of the constitution. We find no clause in that instrument which limits this power; and we dare not interpose a limitation where the people have not been disposed to create one.

The Court’s decision rejected the notion that state and federal judiciary were equal with respect to issues of federal law, concluding that the interests of uniformity and federal supremacy supported the Supreme Court’s authority to overrule state courts on questions of constitutional law. In so ruling, the Court’s decision in Martin v. Hunter’s Lessee further solidified the U.S. Supreme Court’s position as the highest court in the country.