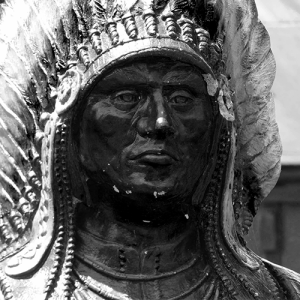 In Johnson v. M’Intosh, 21 U.S. 543 (1823), the U.S. Supreme Court addressed whether Native Americans had the power to give, and of private individuals to receive, title to land.

The justices ultimately answered, in the case of Johnson v. M’Intosh, in the negative, citing the power of Congress to extinguish aboriginal title.

The case involved two competing claims to land located in the Northwest Territory, formally part of the colony of Virginia. Thomas Johnson purchased land from Piankeshaw Native American tribes in 1773 and 1775. Johnson’s descendants, who had inherited the land, filed an ejectment action against the defendant, William M’Intosh, who had obtained the same land from the federal government. The District Court sided with M’Intosh, holding that M’Intosh’s title was superior because Congress granted it. The plaintiffs subsequently appealed to the Supreme Court.

The Court affirmed the lower court’s decision, holding that “the plaintiffs do not exhibit a title which can be sustained in the Courts of the United States.” Chief Justice John Marshall authored the Court’s opinion.

In explaining the Court’s decision, the Chief Justice provided a thorough history of the discovery and settlement of the Americas. He specifically highlighted the importance of the discovery rule under which the conquering nation holds title to land to the exclusion of all others.

[T]he rights of the original inhabitants were, in no instance, entirely disregarded; but were necessarily, to a considerable extent, impaired. They were admitted to be the rightful occupants of the soil, with a legal as well as just claim to retain possession of it, and to use it according to their own discretion; but their rights to complete sovereignty, as independent nations, were necessarily diminished, and their power to dispose of the soil at their own will, to whomsoever they pleased, was denied by the original fundamental principle, that discovery gave exclusive title to those who made it.

Thus, following the American Revolution and the treaties that followed, the federal government obtained the “exclusive right…to extinguish [the Indians’] title, and to grant the soil.” The Court further held that the “power to grant land must negative the existence of any right which may conflict with, and control it. An absolute title to lands cannot exist, at the same time, in different persons, or in different governments.”