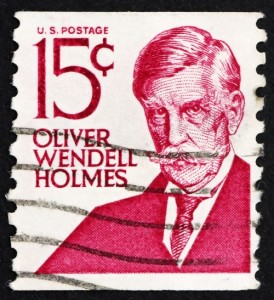 Justice Oliver Wendell Holmes’ dissent in Abrams v. United States 250 U.S. 616 (1919) is widely regarded as one of the most famous dissents in the history of the U.S. Supreme Court. It sowed the seeds for the modern interpretation of freedom of speech under the First Amendment.

A group of Russian anti-war activists were arrested for violating the Sedition Act of 1918, which made it a crime to “willfully utter, print, write, or publish any disloyal, profane, scurrilous, or abusive language about the form of the Government of the United States” or to “willfully urge, incite, or advocate any curtailment of the production” of the things “necessary or essential to the prosecution of the war.”

The men were specifically arrested for printing and distributing leaflets in New York City that were critical of the United States’ role in World War I, most notably the deployment of troops to Russia. The defendants challenged their subsequent convictions, alleging that the acts charged were not unlawful because they were within the protection of the Freedom of Speech and Freedom of the Press.

By a vote of 7-2, the majority of the U.S. Supreme Court upheld the convictions, finding that the defendants’ speech was not protected under the First Amendment. Justice John H. Clarke wrote on behalf of the majority.

In his opinion, Justice Clarke relied on an earlier opinion authored by Justice Holmes in Schenck v. United States regarding the authority of the government to restrict speech under the 1918 Sedition Act. Under the legal standard Holmes outlined, now known as the clear and present danger test, the deciding factor is whether the speech is “of such a nature as to create a clear and present danger that [it] will bring about the substantive evils that Congress has a right to prevent.” Applying this analysis, the majority concluded:

This is not an attempt to bring about a change of administration by candid discussion, for no matter what may have incited the outbreak on the part of the defendant anarchists, the manifest purpose of such a publication was to create an attempt to defeat the war plans of the government of the United States, by bringing upon the country the paralysis of a general strike, thereby arresting the production of all munitions and other things essential to the conduct of the war.

Justice Oliver Wendell Holmes authored a dissent, in which Justice Louis Brandeis joined. The opinion reflects that Justice Holmes underwent a significant change of heart regarding the government’s ability to censor speech under the First Amendment.

In his dissent, Holmes revised his “clear and present danger” test, which was the current legal standard applied in Freedom of Speech cases. According to Holmes, the proper test for restricting speech was whether it “produces or is intended to produce clear and imminent danger that it will bring about forthwith … substantive evils.”

Thus, Justice Holmes’ new test called for much stricter scrutiny, including a direct and immediate correlation between the speech and a subsequent crime. In the case at issue, he rejected the notion that the “surreptitious publishing of a silly leaflet by an unknown man … would present any immediate danger.”

With regard the importance of the Freedom of Speech, Justice Holmes eloquently stated:

Persecution for the expression of opinions seems to me perfectly logical. If you have no doubt of your premises or your power and want a certain result with all your heart you naturally express your wishes in law and sweep away all opposition…But when men have realized that time has upset many fighting faiths, they may come to believe even more than they believe the very foundations of their own conduct that the ultimate good desired is better reached by free trade in ideas. . . . The best test of truth is the power of the thought to get itself accepted in the competition of the market, and that truth is the only ground upon which their wishes safely can be carried out.