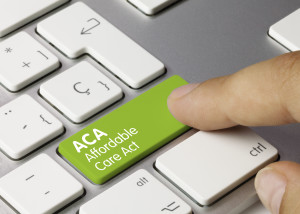 In NFIB v. Sebelius, 567 US __ (2012), the U.S. Supreme Court considered its first constitutional challenge to the Affordable Care Act. By a vote of 5-4, the Court held that the statute’s “individual mandate” provision was a valid exercise of Congress’s power under the Taxing Clause.

The Facts of NFIB v. Sebelius

Congress passed the ACA in 2010 in an effort to increase the number of Americans covered by health insurance and decrease the cost of health care. Under the statute’s individual mandate provisions, most Americans are required to maintain “minimum essential” health insurance coverage. For individuals who are not exempt, and who do not receive health insurance through an employer or government program, the law required the purchase of insurance from a private company. Beginning in 2014, those who do not comply with the mandate must pay a “penalty” to the Internal Revenue Service with an individual’s taxes.

Twenty-six States, several individuals, and the National Federation of Independent Business filed a lawsuit challenging the constitutionality of the individual mandate and the Medicaid expansion. The Court of Appeals for the Eleventh Circuit upheld the Medicaid expansion as a valid exercise of Congress’s spending power, but concluded that Congress lacked authority to enact the individual mandate.

A slim majority of the Court voted to uphold the individual mandate, while also concluding that the Medicaid expansion was unconstitutional. Chief Justice John Roberts wrote on behalf of the majority, and Justices Ruth Bader Ginsburg, Stephen Breyer, Sonia Sotomayor, and Elena Kagan joined the opinion.

In deciding the fate of the ACA, the majority first concluded that the individual mandate was not a valid exercise of Congress’s power under the Commerce Clause or the Necessary and Proper Clause. With regard to the Commerce Clause, Chief Justice Roberts emphasized that the Constitution grants Congress the power to “regulate Commerce,” which implies the existence of commercial activity to be regulated. “The individual mandate, however, does not regulate existing commercial activity. It instead compels individuals to become active in commerce by purchasing a product, on the ground that their failure to do so affects interstate commerce,” he wrote.

As to the Necessary and Proper Clause, the Chief Justice noted that “[each of this Court’s prior cases upholding laws under that Clause involved exercises of authority derivative of, and in service to, a granted power.” In the case of the ACA, the majority concluded that the individual mandates “vests Congress with the extraordinary ability to create the necessary predicate to the exercise of an enumerated power and draw within its regulatory scope those who would otherwise be outside of it.” Accordingly, it found that even if the provision was a necessary part of the healthcare reform law, it was certainly not proper.

In ultimately upholding the law, the majority determined that the individual mandate was within Congress’s power under the Taxing and Spending Clause. Focusing on the substance and application of the “penalty” imposed under the individual mandate rather the precise wording of the statute; the majority held that “the shared responsibility payment may for constitutional purposes be considered a tax.” In support of the Court’s decision, Chief Justice Roberts noted:

With regard to the Medicaid expansion, a majority held that the provision was not a valid exercise of Congress’s spending power because it forced states to either accept the expansion or risk the loss of existing Medicaid funding. As Chief Justice Roberts explained:

As for the Medicaid expansion, that portion of the Affordable Care Act violates the Constitution by threatening existing Medicaid funding. Congress has no authority to order the States to regulate according to its instructions. Congress may offer the States grants and require the States to comply with accompanying conditions, but the States must have a genuine choice whether to accept the offer.

The Dissent of NFIB v. Sebelius

Justices Antonin Scalia, Stephen Kennedy, Clarence Thomas, and Samuel Alito joined an unsigned dissent. It maintained that the individual mandate violated the Constitution because Congress exceeded its powers under the Commerce Clause. The dissenting justices further argued that by characterizing the individual mandate as a tax rather than a penalty, the majority essentially rewrote the law in an effort to uphold its constitutionality, which represented an abuse of judicial power.