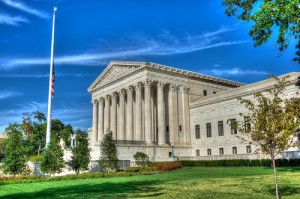 The Supreme Court (SCOTUS) kicked off its new term on October 5, 2015 and filled about 2/3 of its docket.

Issues before SCOTUS will range from the use of hovercraft on National Park Service waterways to the legal rights of terrorism victims. Below are a few coming attractions for the 2014-2015 Term so far:

Fisher v. University of Texas: The second round of the affirmative action case will likely determine whether universities can continue to use race in admissions decisions. The specific question before the Court is: Whether the Fifth Circuit’s re-endorsement of the University of Texas at Austin’s use of racial preferences in undergraduate admissions decisions can be sustained under this Court’s decisions interpreting the Equal Protection Clause of the Fourteenth Amendment, including Fisher v. University of Texas at Austin. In that case, SCOTUS held that the university must demonstrate that taking race into account is both essential and narrowly applied.

Evenwel v. Abbott: The case will interpret the “one person, one vote” principle under the Equal Protection Clause. In Reynolds v. Sims, the Court held that legislative districts must be drawn as close to equal in population as can practically be done. This term, the justices will determine for the first time whether states must use total population or voting population in drawing district lines. SCOTUS agreed to consider the following question: Whether the three-judge district court correctly held that the “one-person, one-vote” principle under the Equal Protection Clause allows States to use total population, and does not require States to use voter population, when apportioning state legislative districts.

Friedrichs v. California Teachers Association: The case addresses the constitutionality of public-sector union agency fees. The specific questions before SCOTUS are: (1) Whether Abood v. Detroit Board of Education should be overruled and public-sector “agency shop” arrangements invalidated under the First Amendment; and (2) whether it violates the First Amendment to require that public employees affirmatively object to subsidizing nonchargeable speech by public-sector unions, rather than requiring that employees affirmatively consent to subsidizing such speech. In Abood, the Court held that public employees could be compelled to pay an agency service fee to cover their fair share of the costs of collective bargaining, contract administration, and grievance adjustment without running afoul of the First Amendment.

Harris v. Arizona Independent Redistricting Commission: After validating the state’s use of an independent redistricting commission last term, SCOTUS will review the constitutionality of legislative districts that it drew up. The issues before the Court include: (1) Whether the desire to gain partisan advantage for one political party justifies intentionally creating over-populated legislative districts that results in tens of thousands of individual voters being denied Equal Protection because their individual votes are devalued, violating the one-person, one-vote principle; and (2) whether the desire to obtain favorable preclearance review by the Justice Department permits the creation of legislative districts that deviate from the one-person, one-vote principle, and, even if creating unequal districts to obtain preclearance approval was once justified, whether this is still a legitimate justification after Shelby County v. Holder.

Bank Markazi v. Peterson: The case involves whether $2 billion of bonds held by the Central Bank of Iran can be seized and distributed to victims of terrorism who filed suit against the country. While the case was pending, Congress enacted the Iran Threat Reduction and Syria Human Rights Act of 2012, which applies exclusively to the litigation. “In order to ensure that Iran is held accountable for paying the judgments,” it provides that, notwithstanding any other state or federal law, the assets “shall be subject to execution” upon only two findings – essentially, that Bank Markazi has a beneficial interest in them and that no one else does. The Court will address whether the statute, which effectively directs a particular result in a single pending case, violates the separation of powers.

Utah v. Strieff: In the Fourth Amendment case, SCOTUS will consider whether evidence must be excluded when an unlawful investigatory stop leads to the discovery of an arrest warrant and is followed by a search incident to arrest. SCOTUS will specifically consider the following question: Should evidence seized incident to a lawful arrest on an outstanding warrant be suppressed because the warrant was discovered during an investigatory stop later found to be unlawful?

Puerto Rico v. Valle: SCOTUS will determine whether the Commonwealth of Puerto Rico and the federal government are separate sovereigns for purposes of the Double Jeopardy Clause of the Fifth Amendment. The Constitution guarantees that citizens can’t be retried for the same crime following their acquittal or conviction. However, the Double Jeopardy Clause does not prohibit state and federal prosecutions for the same crime.