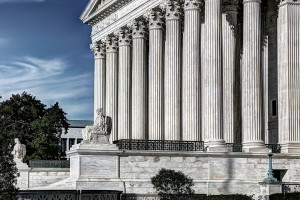 In Omnicare v. Laborers Dist. Council, 135 S. Ct. 1318 (2015), the U.S. Supreme Court interpreted section 11 of the Securities Act of 1933, which addresses the liability for statements of opinion that had divided the Federal Courts of appeal.

Prior to issuing securities, the Securities Act of 1933 requires companies to file a registration statement containing specified information about the issuing company and the securities offered. To promote disclosure and prevent investment fraud, Section 11 of the Securities Act imposes liability if the registration statement either “contain[s] an untrue statement of a material fact” or “omit[s] to state a material fact . . . necessary to make the statements therein not misleading.”

Omnicare filed a registration statement in connection with a public offering of common stock that included contained two statements expressing the company’s opinion that it was in compliance with federal and state laws. After the federal government prosecuted Omnicare for allegedly receiving kickbacks from pharmaceutical manufacturers, several pension funds that purchased Omnicare stock sued the company under Section 11. The funds claimed that Omnicare’s legal-compliance statements constituted “untrue statement[s] of . . . material fact” and that Omnicare “omitted to state [material] facts necessary” to make those statements not misleading.

The District Court dismissed the suit, finding that the funds failed to allege that Omnicare’s officers knew they were violating the law. The Sixth Circuit reversed. While the appeals court acknowledged that the statements at issue expressed opinions, it held that no showing of subjective disbelief was required. Rather, the funds’ allegations that Omnicare’s legal-compliance opinions were objectively false were sufficient to support their claim.

With regard to the omissions clause, the Court held that Section 11 liability may arise if a registration statement omits material facts about the issuer’s inquiry into, or knowledge concerning, a statement of opinion, and if those facts conflict with what a reasonable investor, reading the statement fairly and in context, would take from the statement.