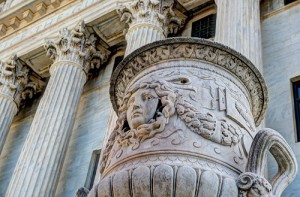 U.S. Supreme Court Review for October, 2015: The justices of the Court have been busy since returning to the bench.

The Supreme Court Review covers oral arguments in ten cases and added a number of important new cases to the docket.

On October 16, 2015, the Court added two new pairs of cases to its docket. The first group of consolidated cases, Stryker Corporation v. Zimmer Inc. and Halo Electronics, Inc. v. Pulse Electronics, Inc., involves when attorneys’ fees and other enhanced damages should be awarded in patent infringement cases, which represents the first intellectual property issue taken up by the Court this term. The other pair of cases, Hughes v. PPL EnergyPlus and CPV Maryland v. PPL EnergyPlus, involve whether states are preempted from regulating the price of electricity through subsidy plans and other measures.

Below are the cases in which the Court heard oral arguments this month:

OBB Personenverkehr AG v. Sachs: The case involves whether a California woman can hold the Austrian national railroad accountable for the serious injuries she suffered in a train crash in Austria. The specific question before the Court is how to determine when an entity is an “agent” of a “foreign state” under the commercial activity exception of the Foreign Sovereign Immunities Act, which the railroad argues bars the suit.

Hawkins v. Community Bank of Raymore: The involves when spouses should be required to guarantee each other’s debts under the Equal Credit Opportunity Act (ECOA). The specific issues before the Court include: (1) Whether “primarily and unconditionally liable” spousal guarantors are unambiguously excluded from being “applicants” under the ECOA because they are not integrally part of “any aspect of a credit transaction”; and (2) whether the Federal Reserve Board has authority under the ECOA to include by regulation spousal guarantors as “applicants” to further the purposes of eliminating discrimination against married women.

Hurst v. Florida: The death penalty case centers on Whether Florida’s death sentencing scheme violates the Sixth Amendment or the Eighth Amendment in light of the Court’s decision in Ring v. Arizona. In that case, the justices held that the right to a jury trial requires that the jury be entrusted with finding all facts necessary for the imposition of the death penalty, including sentencing aggravators. It also held that the Eighth Amendment requires that a jury, rather than a judge, make the decision to sentence a defendant to death.

Montgomery v. Louisiana: The case revolves around how courts should apply the U.S. Supreme Court’s decision in Miller v. Alabama, in which the Court held that the Eighth Amendment prohibits a sentencing scheme that requires life in prison without the possibility of parole for juvenile homicide offenders. The specific questions before the Court this time around include whether the ruling applies retroactively, as well as whether the Supreme Court has jurisdiction to decide whether the Supreme Court of Louisiana correctly refused to give retroactive effect to the decision.

DIRECTV, Inc. v. Imburgia: The Court’s first business law case involves a California court refusal to enforce an arbitration agreement. The Court specifically considered the following question: Whether the California Court of Appeal erred by holding, in direct conflict with the Ninth Circuit, that a reference to state law in an arbitration agreement governed by the Federal Arbitration Act requires the application of state law preempted by the Federal Arbitration Act.

Kansas v. Gleason and Kansas v. Carr: The cases involve the constitutionality of death sentences imposed on two Kansas inmates. The issues raised include whether the Eighth Amendment requires that a capital-sentencing jury be affirmatively instructed that mitigating circumstances “need not be proven beyond a reasonable doubt”; and whether the trial court’s decision not to sever the sentencing phase of the co-defendant brothers’ trial violated an Eighth Amendment right to an “individualized sentencing” determination.

EnerNOC, Inc. v. Electric Power Supply Association: In another case regarding the authority to regulate electricity, the Court will address Whether the Federal Energy Regulatory Commission’s jurisdiction over interstate markets for wholesale sales of electric energy under the Federal Power Act provides the Commission with authority to regulate participation in those markets by demand response resources.

Campbell-Ewald Company v. Gomez: The Court’s first class-action lawsuit of the term involves whether a case becomes moot, and thus beyond the judicial power of Article III, when the plaintiff receives an offer of complete relief on his claim. The Court will also consider whether the answer to the first question is any different when the plaintiff has asserted a class claim under Federal Rule of Civil Procedure 23, but receives an offer of complete relief before any class is certified.