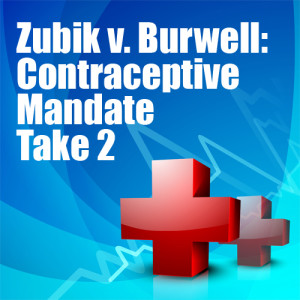 which the justices will again consider the lawfulness of the Affordable Care Act’s (ACA) contraceptive mandate.
The issue before the Court in Zubik v. Burwell this time around is whether religious employers must provide free health insurance coverage for birth control.

The Facts of Zubik v. Burwell

The Court will consider seven consolidated cases. The plaintiffs, including David A. Zubik (the Bishop of the Roman Catholic Diocese of Pittsburgh), Priests for Life, Roman Catholic Archbishop, East Texas Baptist University, Little Sisters of the Poor, Southern Nazarene University, and Geneva College, are all religiously affiliated nonprofit corporations. They maintain that being forced to “facilitate” the provision of health insurance coverage for contraceptives, which they oppose on religious grounds, violates the Religious Freedom Restoration Act of 1993 (RFRA).

The ACA requires employers with more than 50 employees to provide health insurance coverage for the 20 contraceptive methods approved by the Food and Drug Administration. Religious employers, such as churches, are exempt from this contraceptive mandate. In addition, the Department of Health and Human Services (HHS) created an additional exemption for religious nonprofit organizations that object to providing coverage for contraceptive services.

In Burwell v. Hobby Lobby, a slim majority of the Supreme Court held that the contraception mandate placed a substantial burden on closely held corporations, noting that the provision “forces them to pay an enormous sum of money [in the way of excise taxes] if they insist on providing insurance coverage in accordance with their religious beliefs.” The federal government has since extended the accommodation to such employers.

Under current HHS regulations, religiously affiliated nonprofit corporations that object to birth control coverage can notify their insurance company, third-party benefits administrator, or the HHS about their objection. The plaintiffs argue that the notification process essentially acts as a “trigger” and requires them “to provide the morally objectionable coverage and allow their health plans to be used as a vehicle to bring about a morally objectionable wrong.”

In all of the cases, the federal courts of appeal sided with the government, holding that the challengers failed to establish that the contraceptive mandate substantially burdened the exercise of their religious freedom. As explained by the Second Circuit: “Eligible organizations are provided the opportunity to freely express their religious objection to such coverage as well as to extricate themselves from its provision. At the same time, insured individuals are not deprived of the benefits of contraceptive coverage.” This fall, Eighth Circuit Court of Appeals became the first to rule that the accommodation violates RFRA, thereby creating a circuit split.

The primary question raised in all seven ACA cases is whether the contraceptive mandate and its “accommodation” violate the RFRA. The plaintiffs maintain that failing to provide religious nonprofits with an outright exemption forces them to act in violation of their sincerely held religious beliefs and that the Government has not proven that this compulsion is the least restrictive means of advancing any compelling interest.

In Little Sisters v. Burwell, the Court agreed to consider a second question: Can HHS satisfy RFRA’s demanding test for overriding sincerely held religious objections in circumstances where HHS itself insists that overriding the religious objection will not fulfill HHS’s regulatory objective – namely, the provision of no-cost contraceptives to the objector’s employees?

The latest ACA case marks the fourth time that the Court will consider the legality of health care law since its inception in 2010. As with the cases that preceded it, the Court’s decision is likely to be controversial. Oral arguments will take place in late spring, with a ruling expected in June.