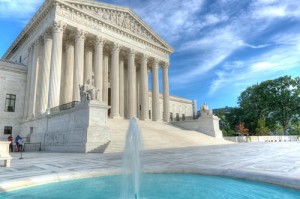 Last week, the U.S. Supreme Court issued its first decision of the term. In OBB Personenverkehr AG v. Sachs, (2015), the Court unanimously held that the doctrine of sovereign immunity barred a California woman’s lawsuit against the Austrian national railroad.

Carol Sachs, a California resident, purchased a Eurail pass from a Massachusetts-based travel agent via the Internet. While boarding a train in Austria operated by OBB Personenverkehr AG (OBB), the Austrian state-owned railway, Sachs fell to the tracks and suffered traumatic personal injuries. She filed a personal injury suit against OBB in federal court.

OBB argued that the Foreign Sovereign Immunities Act, which shields foreign states and their instrumentalities from suit in U.S. courts, barred Sachs’ suit. In response, Sachs countered that her suit fell within the Act’s commercial activity exception, which abrogates sovereign immunity for suits “based upon a commercial activity carried on in the United States by [a] foreign state.” In support of her argument, Sachs maintained that the suit was “based upon” the Massachusetts-based travel agent’s sale of the Eurail pass in the United States, and that the travel agent’s sale of that pass could be attributed to OBB through common law principles of agency. The District Court dismissed the suit, but the Ninth Circuit reversed.

The Court unanimously held that the “commercial activity” exception to the Foreign Sovereign Immunities Act did not apply to the lawsuit. Accordingly, it was barred by sovereign immunity. Chief Justice John Roberts authored the Court’s opinion.

In reaching its decision, the Court applied the precedent established in Saudi Arabia v. Nelson, 507 U. S. 349 (1993), in which the Court held that the “based upon” inquiry requires a court to determine the “particular conduct on which the action is ‘based,’” and identified that conduct by looking to “gravamen of the complaint.” It further found that “the Ninth Circuit used a flawed approach when it found that the “based upon” inquiry would be satisfied if the sale of the Eurail pass provided “an element” of each of Sachs’s claims.”

Under this framework, the Court concluded that Sachs’s suit is not “based upon” the sale of the Eurail pass for purposes of the exception, noting that “the conduct constituting the gravamen of Sachs’s suit plainly occurred abroad.” As the Chief Justice further explained, all of Sachs’ claims “turn on the same tragic episode in Austria, allegedly caused by wrongful conduct and dangerous conditions in Austria, which led to injuries suffered in Austria.”

In Hana Financial Inc. v. Hana Bank, 135 S. Ct. 907 (2015), the U.S. Supreme Court addressed the issue of trademark tacking, which allows a trademark user to make certain changes to its mark over time while retaining its priority position. In a unanimous decision, the justices held that whether two trademarks may be tacked is a question for the jury.

Trademark rights are largely determined by the date of the mark’s first use in commerce, with the party who first uses a mark in commerce having priority over other users. The intellectual property doctrine of trademark tacking recognizes that trademark holders should be allowed to make certain modifications to their marks over time without losing priority. According, courts allow a party to clothe a new mark with the priority position of an older mark in certain situations. Namely, trademark tacking is permitted when the original and revised marks are “legal equivalents” in that they create the same, continuing commercial impression.

Hana Financial, Inc., and Hana Bank both provide financial services to individuals in the United States. When Hana Financial sued Hana Bank for trademark infringement, Hana Bank invoked in defense the tacking doctrine. Hana Financial, Inc.’s claim was tried before a jury. After the district court adopted in substantial part the jury instruction on tacking proposed by Hana Bank, the jury returned a verdict in its favor. On appeal, the Ninth Circuit affirmed the decision, noting that the tacking inquiry was an exceptionally limited and highly fact-sensitive matter reserved for juries, not judges.

The unanimous Court agreed, holding that the jury, rather than a court, should decide whether an older trademark can be tacked to a newer one. Justice Sonia Sotomayor wrote on behalf of the Court.

“When the relevant question is how an ordinary person or community would make an assessment, the jury is generally the decision maker that ought to provide the fact-intensive answer,” Justice Sotomayor explained.

The Court further rejected Hana Financial Inc.’s four arguments in support of its argument that tacking is a question of law to be resolved by a judge, finding them unpersuasive. In support of the conclusion, Justice Sotomayor wrote:

[A]ny concern that a jury may improperly apply the relevant legal standard can be remedied by crafting careful jury instructions. Second, petitioner offers no support for its claim that tacking determinations create new law in a unique way that requires those determinations to be reserved for judges. Third, petitioner worries that the predictability required for a functioning trademark system will be absent if tacking questions are assigned to juries, but offers no reason why trademark tacking should be treated differently from the tort, contract, and criminal justice systems, where juries answer often-dispositive factual questions or make dispositive applications of legal standards to facts. Finally, in arguing that judges have historically resolved tacking disputes, petitioner points to cases arising in the contexts of bench trials, summary judgment, and the like, in which it is undisputed that judges may resolve tacking disputes.