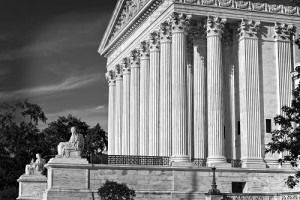 The U.S. Supreme Court heard oral arguments in five cases last week. Several of the decisions have the potential to be blockbusters, with high-profile Constitutional issues at stake. Below is a brief summary of these potential landmark cases:

The justices are poised to determine the fate of tribunal courts administered by Native Americans. The specific issue before the Court is “whether Indian tribal courts have jurisdiction to adjudicate civil tort claims against nonmembers, including as a means of regulating the conduct of nonmembers who enter into consensual relationships with a tribe or its members.”

The case addresses sovereignty of one state in another’s court, a question that dates back to the founding of our country. In oral arguments, the Court considered the following questions: (1) Whether Nevada may refuse to extend to sister States haled into Nevada courts the same immunities Nevada enjoys in those courts; and (2) whether Nevada v. Hall, 440 U.S. 410 (1979), which permits a sovereign State to be haled into the courts of another State without its consent, should be overruled.

In a case that could impact redistricting maps all over the country, the justices will determine the acceptable level of partisanship in the redistricting process. The specific issues the Court include 1. Does the desire to gain partisan advantage for one political party justify intentionally creating over-populated legislative districts that result in tens of thousands of individual voters being denied Equal Protection because their individual votes are devalued, violating the one- person, one-vote principle? 2. Does the desire to obtain favorable preclearance review by the Justice Department permit the creation of legislative districts that deviate from the one-person, one-vote principle? And, even if creating unequal districts to obtain preclearance approval was once justified, is this still a legitimate justification after Shelby County v. Holder, 133 S.Ct. 2612 (2013)?

The Court’s second redistricting case revolves around the equality of voting power. The specific issue is whether the “one-person, one-vote” principle under the Equal Protection Clause allows States to use total population, and does not require States to use voter population, when apportioning state legislative districts.

The affirmative action case will likely determine whether universities can continue to consider race when making admissions decisions. The specific question before the Court is: Whether the Fifth Circuit’s re-endorsement of the University of Texas at Austin’s use of racial preferences in undergraduate admissions decisions can be sustained under this Court’s decisions interpreting the Equal Protection Clause of the Fourteenth Amendment, including the first iteration of the case (Fisher v. University of Texas at Austin).

Please stay tuned to the blog in the coming weeks, as we will provide more in-depth coverage of the issues at stake in the affirmative action and redistricting cases.