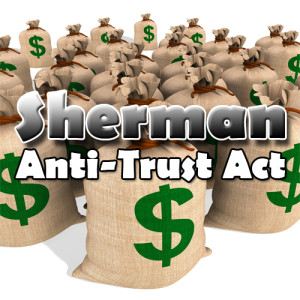 In United States v. E.C. Knight, 156 U.S. 1 (1895), the U.S. Supreme Court held that the Sherman Anti-Trust Act was a valid exercise of Congress’ power under the Commerce Clause of the U.S. Constitution. However, it also held that the statute could not be used to prevent a monopoly in the manufacture of goods.

Congress enacted the Sherman Anti-Trust Act in 1890 in an effort to address the rapid growth of corporate monopoly and the centralization of wealth. The statute provided that “every person who shall monopolize, or attempt to monopolize, or combine or conspire with any other person or persons, so monopolize any part of the trade or commerce among the several States … shall be deemed guilty of a felony.”

Shortly after the law was passed, the American Sugar Company sought to acquire its four largest competitors. Because the transaction would result in one company controlling 98 percent of the U.S. sugar-refining business, the federal government sought to enjoin the acquisition under the Sherman Anti-Trust Act.

By a vote of 8-1, the Court held that the Sherman Anti-Trust Act was constitutional, but did not apply to the facts of the case. Justice Melville W. Fuller wrote the majority opinion.

While the Court upheld the constitutionality of the Sherman Anti-Trust Act under the Commerce Clause, it found that it did not apply to manufacturing. According to the Court, the statute was intended to address “a monopoly in interstate and international trade or commerce, and not a monopoly in the manufacture of a necessary of life.”

In reaching its decision, the Court attempted to make a distinction between commercial activities within the purview of the federal government and those left to the states. It ultimately concluded that the Commerce Clause authorized Congress to pass laws governing the buying, selling, and transportation of goods between states. Meanwhile, oversight of how the goods were made was a state law issue. As Justice Fuller further explained:

While never expressly overruled, the Supreme Court gradually abandoned the reasoning in E.C. Night in favor of a more expansive interpretation of the Commerce Clause that allows for greater federal oversight over economic activities.