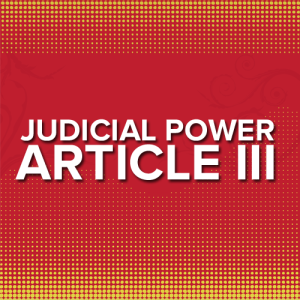 In Campbell-Ewald Co. v. Gomez, 577 U. S. ____ (2016), the U.S. Supreme Court considered whether a case becomes moot, and thus beyond the judicial power of Article III, when the plaintiff receives and rejects an offer of complete relief on his claim. By a vote of 6-3, the justices ruled that an unaccepted settlement offer or offer of judgment does not moot a plaintiff’s case. The decision in favor of consumers is a rare class-action loss for the business community.

The U.S. Navy contracted with petitioner Campbell-Ewald Company (Campbell) to develop a multimedia recruiting campaign that included the sending of text messages to young adults, but only if those individuals had “opted in” to receipt of marketing solicitations on topics that included Navy service. Campbell’s subcontractor, Mindmatics LLC, transmitted the Navy’s message to over 100,000 recipients, including respondent Jose Gomez, who alleges that he did not consent to receive text messages and was not in the Navy’s targeted age group. Gomez filed a class action lawsuit, alleging that Campbell violated the Telephone Consumer Protection Act (TCPA).

Before the deadline for Gomez to file a motion for class certification, Campbell proposed to settle Gomez’s individual claim and filed an offer of judgment pursuant to Federal Rule of Civil Procedure 68. Although Gomez did not accept, Campbell argued that its offer mooted Gomez’s individual claim by providing him with complete relief. The District Court denied the motion, but ultimately dismissed the suit on summary judgment. The court held that Campbell, as a contractor acting on the Navy’s behalf, acquired the Navy’s sovereign immunity from suit under the TCPA. The Ninth Circuit reversed. While it agreed that Gomez’s case remained live, the panel held that Campbell was not entitled to “derivative sovereign immunity.”

Article III of the Constitution limits the authority of the federal courts to the adjudication of “Cases” or “Controversies.” As interpreted by the Supreme Court, Article III’s “cases” and “controversies” limitation requires that “an actual controversy . . . be extant at all stages of review, not merely at the time the complaint is filed,” Arizonans for Official English v. Arizona, 520 U. S. 43, 67 (internal quotation marks omitted). However, a case does not become moot as “long as the parties have a concrete interest, however small,” in the litigation’s outcome, Chafin v. Chafin, 568 U. S. ___, ___ (internal quotation marks omitted).

The majority held that an unaccepted offer does not moot a plaintiff’s claim, thereby depriving federal courts of Article III jurisdiction. Justice Ruth Bader Ginsburg wrote for the majority. As she explained: “[A]n unaccepted settlement offer has no force. Like other unaccepted contract offers, it creates no lasting right or obligation. With the offer off the table, and the defendant’s continuing denial of liability, adversity between the parties persists.”

The Court further held that Campbell’s status as a federal contractor did not entitle it to immunity from suit for its violation of the TCPA. “When a contractor violates both federal law and the Government’s explicit instructions, as alleged here, no immunity shields the contractor from suit,” Ginsburg stated.

Chief Justice John Roberts authored dissent that was joined by Justices Samuel Alito and Antonin Scalia. The dissenters argued that the case was indeed moot. As the Chief Justice wrote: