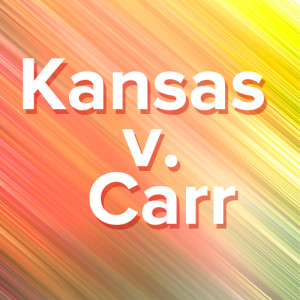 In Kansas v. Carr, 577 U. S. ____ (2016), the U.S. Supreme Court addressed the constitutionality of jury instructions used in two Kansas capital murder cases. The justices ruled that the Eighth Amendment does not mandate that courts instruct a jury that mitigating circumstances need not be proved beyond a reasonable doubt when considering the death penalty.

The Facts of Kansas v. Carr

The Court’s ruling resolved three consolidated cases: Kansas v. Jonathan Carr, Kansas v. Reginald Carr, and Kansas v. Gleason. Sidney Gleason was sentenced to death by a Kansas jury for killing a co-conspirator and her boyfriend to cover up the robbery of an elderly man. Meanwhile, Reginald and Jonathan Carr were sentenced to death for a horrific crime spree known as the “Wichita Massacre.” The brothers were convicted of various charges stemming from the brutal rape, robbery, kidnaping, and execution-style shooting of five young men and women. The death penalty was handed down after a joint sentencing proceeding.

The Kansas Supreme Court vacated the death sentences in each case, holding that the sentencing instructions violated the Eighth Amendment by failing “to affirmatively inform the jury that mitigating circumstances need only be proved to the satisfaction of the individual juror in that juror’s sentencing decision and not beyond a reasonable doubt.” It also held that the Carrs’ Eighth Amendment right “to an individualized capital sentencing determination” was violated by the trial court’s failure to sever their sentencing proceedings.

The Court rejected the appeals of the death row inmates by a vote of 8-1. Justice Antonin Scalia wrote on behalf of the majority.

With regard to the proper jury instructions regarding mitigating circumstances, the majority held that the Court’s capital-sentencing precedent does not support requiring a court to instruct a jury that mitigating circumstances need not be proved beyond a reasonable doubt. “It would mean nothing, we think, to tell the jury that the defendants must deserve mercy beyond a reasonable doubt; or must more likely than not deserve it,” Justice Scalia wrote.

The Supreme Court also reversed the Kansas Supreme Court’s holding that the brothers were to entitled to individualized capital sentencing determinations. “[T]he contention that the admission of mitigating evidence by one Carr brother could have ‘so infected’ the jury’s consideration of the other’s sentence as to amount to a denial of due process is beyond the pale,” Justice Scalia wrote.

“Joint proceedings are not only permissible but are often preferable when the joined defendants’ criminal conduct arises out of a single chain of events,” he further explained.

Given the Carr brothers’ “acts of almost inconceivable cruelty and depravity,” the majority found that “only the most extravagant speculation would lead to the conclusion that the supposedly prejudicial evidence rendered the Carr brothers’ joint sentencing proceeding fundamentally unfair.”

The cases were remanded for further proceedings not inconsistent with the Court’s opinion.

The Dissent of Kansas v. Carr

Justice Sonia Sotomayor was the lone dissenter. She argued that the Court should not have heard the case in the first place given that the State of Kansas had not violated a Constitutional right, but rather “overprotected its citizens based on its interpretation of state and federal law.”