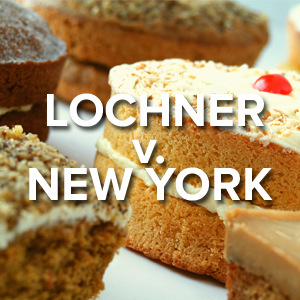 In Lochner v. New York, 198 U.S. 45 (1905), the U.S. Supreme Court struck down a New York law that established maximum working hours for bakers. According to the majority, the right to buy and sell labor was a liberty interest protected under the Due Process Clause of the Fourteenth Amendment.

The Court’s decision launched the so-called “Lochner Era,” in which the Court struck down a number of labor regulations intended to improve working conditions. The Court eventually overturned Lochner more than three decades later in West Coast Hotel v. Parrish.

In 1897, the State of New York enacted the Bakeshop Act. Section 110 provided that “no employee shall be … permitted to work in a biscuit, bread, or cake bakery or confectionery establishment more than sixty hours in any one week.”

Joseph Lochner, the owner of a Utica bakery, was fined under the statute for allowing an employee to work more than 60 hours in a week. After he refused to pay the fine, Lochner was incarcerated. He appealed his conviction all the way to the U.S. Supreme Court.

By a vote of 5-4, the Court found that the New York labor law was unconstitutional because it was “an unreasonable, unnecessary, and arbitrary interference with the right of the individual to his personal liberty.” Accordingly, it overturned Lochner’s conviction. Justice Rufus Peckham authored the majority opinion, in which Chief Justice Melville Fuller and Justices David J. Brewer, Henry B. Brown, and Joseph McKenna joined.

In reaching its decision, the majority recognized that “the general right to make a contract in relation to his business is part of the liberty of the individual protected by the Fourteenth Amendment of the Federal Constitution.”

Because the Court determined that the right to purchase or sell labor was a protected liberty interest under the Due Process Clause, it further found that “the only way a state may counter this right is to show they are exercising a valid police power with their regulation.” With regard to the New York law, the majority concluded that it was not a valid exercise of police power. It noted that the goal of the labor law was not to protect the safety of workers, but rather to interfere with the free market.

“The freedom of master and employee to contract with each other in relation to their employment … cannot be prohibited or interfered with, without violating the Federal Constitution,” Justice Peckham explained.

Justice Harlan’s opinion, which was joined by Justices Edward D. White and William R. Day, argued that the majority failed to give proper weight to the legislative intent to “protect the physical well-being of those who work in bakery and confectionery establishments.” Justice Harlan wrote:

If a state is to interfere with the right to contract, it may do so only if the regulation involves a state’s police power to protect the health of its citizens. The Court should not be concerned with the policy of legislation. The only question is whether the means devised by the state are germane to a valid end.

Justice Holmes’ dissent accused the majority of judicial activism and cited numerous examples of state’s interference with the liberty to contract, including Sunday laws and usury laws. He further argued:

A Constitution is not intended to embody a particular economic theory. Finding certain opinions natural and familiar or novel ought not to determine whether the statutes conflict with the Constitution. The word “liberty” in the Fourteenth Amendment is improperly construed when it is held to prevent the natural outcome of a dominant opinion, unless it can be said that a rational and fair man necessarily would admit that the statute proposed would infringe fundamental traditions, which have been understood by the traditions of our people and law.