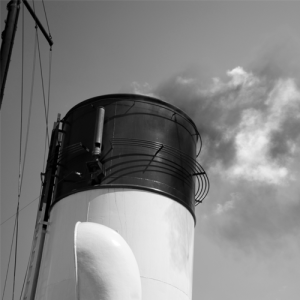 In Livingston v. Van Ingen, 9 Johns. R. 507 N.Y. 1812, the New York Court for the Correction of Errors upheld a New York statute authorizing a monopoly on steam boat transportation in New York waters. The appeals court decision, which was later nullified by the U.S. Supreme Court’s holding in Gibbons v. Ogden, highlights the tensions that existed between state and federal regulation as the new nation grew its economy.

In 1808, the state of New York passed a law granting Robert R. Livingston and Robert Fulton the exclusive right to navigate the waters of the State with steamboats, which were a relatively new form of transportation. Under the statute, all steamboats operating in New York waters were required to obtain a license from Livingston and Fulton. If a license was not obtained, the vessels were subject to forfeiture.

James Van Ingen co-owned two steamboats, the Hope and the Perseverance, which provided ferry service on the Hudson River. When Livingston and Fulton discovered that Van Ingen did not secure a license, they filed suit, seeking to prohibit the operation of the steamboats in violation of the New York law. However, the court refused to grant an injunction. Livingston and Fulton appealed to the New York Court for the Correction of Errors.

The case centered on how to interpret Article 1, Section 8, Clause 3 of the U.S. Constitution, otherwise known as the Commerce Clause. It states that Congress is specifically empowered “to regulate Commerce with foreign Nations, and among several States, and with the Indian Tribes.” More simply put, the Commerce Clause gives Congress exclusive authority over commercial activities among the states and with foreign countries and Indian tribes. Under this framework, the individual states can only regulate intrastate commerce that takes place exclusively within their borders.

The New York appeals court overturned the decision, finding that the “exclusive right to navigate the waters of this state by boats propelled by fire or steam, is constitutional.” It ordered the lower court to grant the injunction in favor of Livingston and Fulton.

As was customary at the time, Justices Yates, Thompson and Kent all authored individual opinions. Justice Kent’s is most frequently cited for his discussion of the distinction between “internal” and “external” commerce. He explained his reasoning as follows:

[T]he states are under no other constitutional restriction, and are, consequently, left in possession of a vast field of commercial regulation; all the internal commerce of the state by land and water remains entirely, and I may say exclusively, within the scope of its original sovereignty. The congressional power relates to external not to internal commerce, and it is confined to the regulation of that commerce.

The decision of the New York appeals court did not resolve the Commerce Clause controversy or the battle over the steamboat monopoly. More than a decade later, the U.S. Supreme Court decided Gibbons v. Ogden. In the landmark case, the Court invalidated the New York statute authorizing the monopoly. More importantly, the Court held that the Constitution authorizes Congress to regulate any form of commerce that crosses state lines.