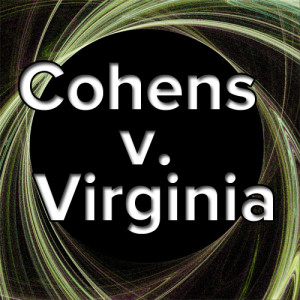 In Cohens v. Virginia, 19 U.S. 264 (1821), the U.S. Supreme Court established itself as the highest court in the county. The justices expressly held that the Court had appellate jurisdiction over state court criminal law decisions involving alleged Constitutional violations.

The Facts of Cohens v. Virginia

In 1812, Congress authorized the establishment of a National Lottery to raise funds for the District of Columbia. Neighboring Virginia, which operated its own state lotteries, enacted a law prohibiting the sale of out-of-state lottery tickets. Mendes J. Cohen and Philip J. Cohen were convicted of selling National Lottery tickets in Norfolk, Virginia, in violation of the state law. In their defense, the Cohen brothers argued that the sale was authorized under the federal law governing the National Lottery. After state courts rejected the argument, the Cohens appealed to the U.S. Supreme Court.

On appeal, the State of Virginia argued that the U.S. Supreme Court did not have jurisdiction to consider the case. Virginia maintained that the Supreme Court was not authorized to hear cases in which a state is a party or criminal decisions issued by state courts.

The judicial Power shall extend to all cases in Law and Equity, arising under this Constitution, the Laws of the United States, and Treaties made, or which shall be made, under their Authority;–to all Cases affecting Ambassadors, other public Ministers and Consuls;–to all Cases of admiralty and maritime Jurisdiction;–to Controversies to which the United States shall be a Party;–to Controversies between two or more States;– between a State and Citizens of another State,–between Citizens of different States,–between Citizens of the same State claiming Lands under Grants of different States, and between a State, or the Citizens thereof, and foreign States, Citizens or Subjects.

The Supreme Court unanimously held that it had jurisdiction to review the case and ultimately upheld the conviction. Chief Justice John Marshall wrote on behalf of the Court.

With regard to the nature of the parties, the Court found it was irrelevant to its appellate jurisdiction. “We think a case arising under the Constitution or laws of the United States is cognizable in the Courts of the Union whoever may be the parties to that case,” Chief Justice Marshall wrote.

The justices also affirmed that the Constitution granted the Court appellate jurisdiction over all cases arising under the Constitution or laws of the United States, even those cases decided by state courts. Under an alternative conclusion, the Court noted, the “Constitution, laws, and treaties may receive as many constructions as there are States.”

In support of its decision, the Court cited the plain language of Article III as well as the Framers’ intent. “There is certainly nothing in the circumstances under which our Constitution was formed, nothing in the history of the times, which would justify the opinion that the confidence reposed in the States was so implicit as to leave in them and their tribunals the power of resisting or defeating, in the form of law, the legitimate measures of the Union.”

The decision also solidified the supremacy of federal law under the Supremacy Clause of Article VI. As Chief Justice Marshall explained: “The Constitution and laws of a State, so far as they are repugnant to the Constitution and laws of the United States, are absolutely void. These States are constituent parts of the United States. They are members of one great empire — for some purposes sovereign, for some purposes subordinate.”