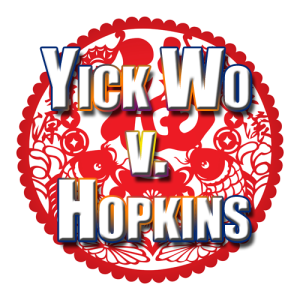 In Yick Wo v. Hopkins, 118 U.S. 356 (1886), the U.S. Supreme Court first held that discriminatory enforcement of a facially neutral law violated the Equal Protection Clause of the Fourteenth Amendment.

The Facts of the Yick Wo v. Hopkins

In 1880, the city of San Francisco adopted an ordinance requiring all laundries in wooden buildings to obtain a permit from the Board of Supervisors. At the time, individuals of Chinese descent operated more than two-thirds of San Francisco’s laundry businesses. The Board of Supervisors had the discretion to grant or withhold permits. Nearly all Chinese owners were denied permits, while all other operators of laundries in wooden building were able to obtain permits.

Yick Wo and Wo Lee were fined and later arrested for operating laundries without a permit. They sued for writ of habeas corpus, alleging that the discriminatory enforcement of the ordinance violated their rights under the the Fourteenth Amendment’s Equal Protection Clause. The Supreme Court of California and the Circuit Court of the United States for the District of California denied the claims, citing that the ordinance was not discriminatory as written.

The Court’s Decision on Yick Wo v. Hopkins

The Court struck down the law and ordered the dismissal of all charges. Justice T. Stanley Matthews authored the unanimous opinion.

The Court held that the biased enforcement of the law violated the Constitution, even though it was impartial on its face. As noted by the Court, the administration of the law was directed exclusively against a specific class of people and, therefore, ran afoul of the Equal Protection Clause. As the Court’s opinion explained:

Whatever may have been the intent of the ordinances as adopted, they are applied by the public authorities charged with their administration, and thus representing the State itself, with a mind so unequal and oppressive as to amount to a practical denial by the State of that equal protection of the laws which is secured to the petitioners, as to all other persons, by the broad and benign provisions of the Fourteenth Amendment to the Constitution of the United States.

As the extent of the unjust discrimination, Justice Matthews further added:

If it is applied and administered by public authority with an evil eye and an unequal hand, so as practically to make unjust and illegal discriminations between persons in similar circumstances, material to their rights, the denial of equal justice is still within the prohibition of the Constitution.

The Court further found that the guarantees of the Equal Protection Clause extend to all persons within the territorial jurisdiction of the United States, without regard to differences of race, of color, or of nationality. “Those subjects of the Emperor of China who have the right to temporarily or permanently reside within the United States, are entitled to enjoy the protection guaranteed by the Constitution and afforded by the laws,” Justice Matthews stated.