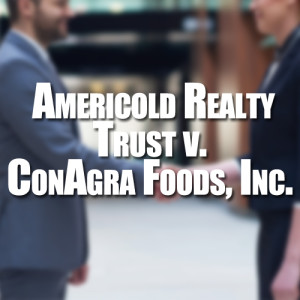 On March 7, 2016, the U.S. Supreme Court held that for purposes of diversity jurisdiction, the citizenship of an unincorporated entity, such as a real estate investment trust, depends on the citizenship of all of its members. The decision in Americold Realty Trust v. ConAgra Foods, Inc. was unanimous.

After a fire destroyed their products, a group of corporations based in Delaware, Nebraska, and Illinois sued the owner of the underground food-storage warehouse in a Kansas court. The defendant, Americold Realty Trust, is a “real estate investment trust” organized under Maryland law. Americold removed the suit to Federal District Court based on diversity-of- citizenship jurisdiction. The District Court ruled in Americold’s favor.

On appeal, the Tenth Circuit held that the District Court lacked jurisdiction to hear the suit. According to the appeals court, since Americold was not a corporation, its citizenship for diversity jurisdiction purposes should be based on the citizenship of its members, which included its shareholders. Because no record of those shareholders’ citizenship existed, diversity was not proved.

The Supreme Court agreed with the Tenth Circuit. “While humans and corporations can assert their own citizenship, other entities take the citizenship of their members,” Justice Sonia Sotomayor wrote.

In reaching its decision, the Court rejected Americold’s argument that anything called a “trust” possesses the citizenship of its trustees alone. Traditionally, a trust was considered a “fiduciary relationship” between multiple people and could not be haled into court; hence, legal proceedings involving a trust were brought by or against the trustees in their own name. Americold confuses the traditional trust with the variety of unincorporated entities that many States have given the “trust” label.