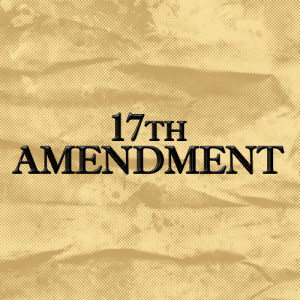 In 1913, the states ratified the Seventeenth Amendment to the U.S. Constitution to require the direct election of senators by the citizens of the United States.

When drafting the U.S. Constitution, the framers intended that the states retain authority over the acts of Congress and that the federal government would respect state’s rights.   Article I, section 3 stated: “The Senate of the United States shall be composed of two Senators from each state, chosen by the legislature thereof for six Years; and each Senator shall have one Vote.” The process was in place for 125 years.

Calls for popular elections of U.S. senators began in the mid 19th century, but did not gain traction until the 1890s during the progressive movement.   Along with other populist ideas like the right of the public to initiate legislation through petition and referendum, the direct election of U.S. Senators significantly changed the founder’s original concept of a federal or constitutional democratic republic.

Three important concerns contributed to the popularity of the idea:  First, was the proliferation of vacant Senate seats due to deadlocked state legislatures. Between 1891 and 1905, 45 deadlocks took place in 20 states. Second, were the concerns about the validity of elections as political parties began to concentrate power in their leaders.  Third, the public became more sensitive about the private occupations of the members of Congress that created conflicts of interests sometimes leading to outright charges of bribery.  Nine bribery cases were brought before the Senate between 1866 and 1906.

The controversial election of Senator John Stockton of New Jersey spurred one of the earliest reforms in the process of selecting United States Senators. His election was contested based on the fact that he was elected by a plurality rather than a majority of the state legislature. In defense, Stockton noted that the process used to elect senators varied significantly from state to state. Congress subsequently enacted a new law in 1866 that governed the process for electing senators in each state.

During each session of Congress from 1893 to 1902, a constitutional amendment to directly elect senators was proposed but failed to progress in the Senate. After the turn of the century, the states began to take matters into their own hands by calling for a constitutional convention. Several states also came up with their own direct election systems, which included primary and general elections. Public pressure also began to mount. William Randolph Hearst was a vocal proponent of reform, using his vast publishing empire to advocate for direct election with muckraking articles.

In 1911, Kansas Senator Joseph Bristow offered a resolution proposing a constitutional amendment. Given that many new senators were the product of direct election, the measure finally passed. After lengthy debate in the House, the proposal was sent to the states for approval. The Seventeenth Amendment attained the required three-fourths majority with Connecticut’s ratification, and it officially became part of the Constitution in 1913. On year later, all senatorial elections were held by popular vote for the first time.

The Text of the Seventeenth Amendment

The Senate of the United States shall be composed of two Senators from each state, elected by the people thereof, for six years; and each Senator shall have one vote. The electors in each state shall have the qualifications requisite for electors of the most numerous branch of the state legislatures.

This amendment shall not be so construed as to affect the election or term of any Senator chosen before it becomes valid as part of the Constitution.