The Eighteenth Amendment: The Prohibition of Alcohol 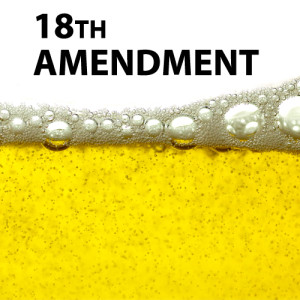 The Eighteenth Amendment banned making, transporting, and selling alcoholic beverages throughout the United States. While proponents hoped prohibiting alcohol would significantly reduce crime and other societal ills, the resulting black market fostered organized crime. The amendment was repealed by the Twenty-first Amendment in 1933.

Spurred by religious organizations, the Temperance Movement grew steadily throughout the late 1800s. Groups like the Women’s Christian Temperance Union (WCTU) and Anti-Saloon League rallied against the destructive nature of alcohol, arguing that it was responsible for a number of social problems.

Prohibition legislation started at the state level with the abolition of the sale of alcohol. By 1916, 23 of 48 states had enacted legislation banning saloon and other establishments that sold liquor. Many states also prohibited the manufacture of alcoholic beverages. As the Prohibition Movement grew, “dry” lawmakers attained a majority in the U.S. Congress. Both chambers approved the Eighteenth Amendment in December 1917.

Unique to the Eighteenth Amendment, it contained a provision that required ratification by a specified deadline. However, it ultimately became a nonissue, as the Amendment was ratified by the requisite three-fourths of the states on January 16, 1919. New Jersey was the last state to ratify the amendment in 1922.

Congress subsequently passed the National Prohibition Act (also known the Volstead Act) to carry out the amendment. It included definitions of terms, punishments for violations, and exceptions for research, medicine, and religion.

Since the possession of alcohol was not illegal, the government soon found that the Eighteenth Amendment was difficult to enforce, with bootlegging operations popping up across the country. While consumption of alcohol declined and crime decreased overall, the black market for alcohol became a lucrative business and encouraged the growth of organized crime. Congress ultimately abandoned the “noble experiment” with the passage and ultimate ratification of the 21st Amendment.

The 21st Amendment officially repealed Prohibition nationwide. However, it also acknowledged the continued legality of any state laws that still prohibited or regulated alcohol. Accordingly, there are still some areas of the country that are “dry.”

The Text of the Eighteenth Amendment

Section 1—After one year from the ratification of this article the manufacture, sale, or transportation of intoxicating liquors within, the importation thereof into, or the exportation thereof from the United States and all territory subject to the jurisdiction thereof for beverage purposes is hereby prohibited.

Section 2—The Congress and the several States shall have concurrent power to enforce this article by appropriate legislation.

Section 3—This article shall be inoperative unless it shall have been ratified as an amendment to the Constitution by the legislatures of the several States, as provided in the Constitution, within seven years from the date of the submission hereof to the States by the Congress.