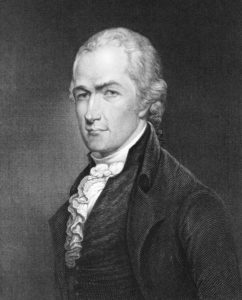 In Hylton v United States, the U.S. Supreme Court upheld an annual tax on carriages was a valid exercise of Congress’ constitutional authority. It specifically ruled that the tax was not a direct tax that required compliance with Article 1’s requirements for the apportioning of direct taxes.

In 1794, Congress enacted a law entitled “An act to lay duties upon carriages for the conveyance of persons.” The statute levied a tax of sixteen dollars on each carriage owned by an individual or business. Daniel Hylton challenged the constitutionality of the law, arguing that it was a direct tax that had not been apportioned in accordance with Article 1. Alexander Hamilton, argued on behalf of the government before the U.S. Supreme Court.

Prior to the enactment of the Sixteenth Amendment, the U.S. Constitution mandated that all direct taxes be imposed in proportion to each state’s population. Pursuant to Article 1, Section 2:

The Court upheld the tax. As was the custom at the time, each of the justice wrote separately.

Justice Samuel Chase wrote, “As I do not think the tax on carriages is a direct tax…I am for affirming the judgment of the Circuit Court.” Justice William Paterson wrote, “All taxes on expenses or consumption are indirect taxes. A tax on carriages is of this kind, and of course is not a direct tax…I am, therefore, of opinion, that the judgment rendered in the Circuit Court of Virginia ought to be affirmed.”

The case was the first to address the constitutionality of an act of Congress. However, because the law was ultimately upheld, it is not regarded with the same significance as the Court’s later decision in Marbury v. Madison.

In his opinion, Justice Chase acknowledged what was likely on the horizon, writing:

As I do not think the tax on carriages is a direct tax, it is unnecessary, at this time, for me to determine, whether this court, constitutionally possesses the power to declare an act of Congress void, on the ground of its being made contrary to, and in violation of, the Constitution; but if the court have such power, I am free to declare, that I will never exercise it, but in a very clear case.