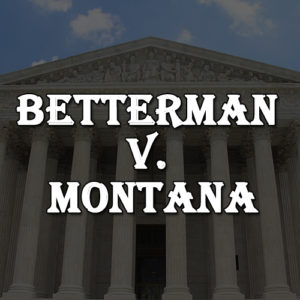 In Betterman v. Montana, 578 U. S. ____ (2016), the U.S. Supreme Court clarified that the Sixth Amendment’s speedy trial guarantee does not apply once a defendant has been found guilty at trial or has pleaded guilty to criminal charges. The Court’s decision was unanimous.

The Speedy Trial Clause of the Sixth Amendment to the United States Constitution provides that “[i]n all criminal prosecutions, the accused shall enjoy the right to a speedy trial.” The Clause is intended to protect defendants from delay between being arrested and the beginning of trial. The remedy for violation of the Speedy Trial Clause is dismissal with prejudice.

Brandon Betterman pleaded guilty to bail jumping after failing to appear in court on domestic assault charges. He was then jailed for over 14 months awaiting sentence, in large part due to institutional delay. He was eventually sentenced to seven years’ imprisonment, with four of the years suspended. Arguing that the 14-month gap between conviction and sentencing violated his speedy trial right, Betterman appealed. However, the Montana Supreme Court affirmed the conviction and sentence. It ruled that the Sixth Amendment’s Speedy Trial Clause does not apply to postconviction, presentencing delay.

The Supreme Court agreed. It held that the Sixth Amendment’s Speedy Trial guarantee “protects the accused from arrest or indictment through trial, but does not apply once a defendant has been found guilty at trial or has pleaded guilty to criminal charges.” Justice Ruth Bader Ginsburg authored the Court’s opinion.

“As a measure protecting the presumptively innocent, the speedy trial right — like other similarly aimed measures — loses force upon conviction,” Justice Ginsburg wrote. In reaching its decision, the Court further emphasized that “the sole remedy for a violation of the speedy trial right” is dismissal of the charges with prejudice, which “would be an unjustified windfall, in most cases, to remedy sentencing delay by vacating validly obtained convictions.”

The Court acknowledged Betterman’s argument that sentencing hearings have largely replaced the trial as the forum for dispute resolution, given that many cases are resolved via plea bargain. “The modern reality, however, does not bear on the presumption-of-innocence protection at the heart of the Speedy Trial Clause,” Justice Ginsburg wrote. “And factual disputes, if any there be, at sentencing, do not go to the question of guilt; they are geared, instead, to ascertaining the proper sentence within boundaries set by statutory minimums and maximums.”

Finally, the Court noted that while the Speedy Trial Clause may not apply, defendants may have other recourse, such as relief under the Due Process Clauses of the Fifth and Fourteenth Amendments. While Justice Sonia Sotomayor outlined a framework for analyzing post-conviction delay claims under the Due Process Clause in her concurrence, Justice Clarence Thomas, joined by Justice Samuel A. Alito Jr., argued it was an issue for another day.

“We have never decided whether the Due Process Clause creates an entitlement to a reasonably prompt sentencing hearing,” Justice Thomas wrote. “Today’s opinion leaves us free to decide the proper analytical framework to analyze such claims if and when the issue is properly before us.”