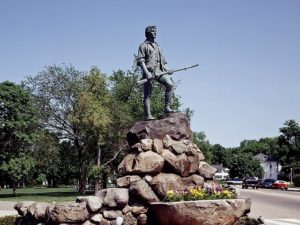 In Wayman v Southard, 23 U.S. 10 Wheat. 1 1 (1825), the U.S. Supreme Court first grappled with the doctrine of non-delegation, under which one branch of government can’t delegate its constitutionally authorized power to another. In the decision, Chief Justice John Marshall distinguished between “important” subjects and mere details, which the Court held Congress may delegate to other branches.

The Facts in Wayman v Southard

The case involved the Process Act of 1792, which was one of several federal statutes that authorized the federal courts to establish rules of practice, provided such rules were not repugnant to the laws of the United States. The specific provision at issue stated:

[T]hat the forms of writs, executions, and other process, except their style, and the forms and modes of proceeding in suits in those of common law, shall be the same as are now used in the said Courts respectively, in pursuance of the act entitled, “an act to regulate processes in the Courts of the United States,” except so far as may have been provided for by the act to establish the judicial Courts of the United States; subject, however, to such alterations and additions as the said Courts respectively shall, in their discretion, deem expedient, or to such regulations as the Supreme Court of the United States shall think proper, from time to time, by rule, to prescribe to any Circuit or District Court concerning the same.

As described in the Court’s opinion, “the defendants contend, that this clause, if extended beyond the mere regulation of practice in the court, would be a delegation of legislative authority which congress can never be supposed to intend, and has not the power to make.”

The Supreme Court held that the statute did not constitute an impermissible delegation of Congress’ power. In so ruling, the Court held that while Congress holds the legislative power, it may authorize the executive or the judicial branches to fill in the details of such laws.

“The line has not exactly been drawn which separates those important subjects, which must be entirely regulated by the legislature itself, from those of less interest, in which a general provision may be made, and power given to those who are to act under such general provisions, to fill up the details,” Chief Justice Marshall acknowledged.

In reaching its decision, the Court noted that Congress had expressly enabled the courts to regulate their practice by other laws, such as the Judiciary act of 1789. It provided “that all the said courts shall have power…to make and establish all necessary rules for the orderly conducting business in the said courts, provided such rules are not repugnant to the laws of the United States.”

The Chief Justice also highlighted that “Congress has not, in fact, delegated this authority to the Court. The several Process Acts passed by Congress, regulate the forms only.” He added:

Every Court has, like every other public political body, the power necessary and proper to provide for the orderly conduct of its business. This may be compared to the separate power which each house of Congress has to determine the rules of its proceedings, and to punish contempts. This is altogether different from the general legislative power, which Congress cannot delegate, and never has attempted to delegate, to either house, separately, or to the executive and judicial departments of the government.