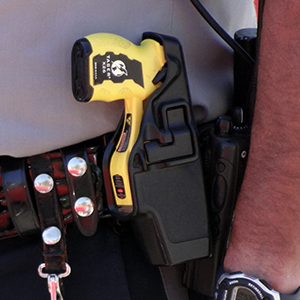 In Commonwealth v Caetano, 577 U. S. ____ (2016), the U.S. Supreme Court held that a Massachusetts court’s proffered reasons for upholding a ban on personal possession or use of a “stun gun” contradicted the Court’s prior Second Amendment holdings. The Court issued a unanimous per curium opinion.

The Facts in Commonwealth v Caetano

To protect herself from an abusive ex-boyfriend, Jaime Caetano accepted a stun gun from a friend. One night after leaving work, Caetano found her ex-boyfriend waiting for her outside. She displayed the stun gun, and she told her ex-boyfriend that she was prepared to use it if he did not leave her alone. He got scared and left.

Under Massachusetts law, Caetano’s possession of the stun gun was illegal. When police later discovered the weapon, she was arrested, tried, and convicted. The Massachusetts Su­preme Judicial Court affirmed the conviction, holding that a stun gun “is not the type of weapon that is eligible for Second Amendment protection” because it was “not in common use at the time of [the Second Amendment’s] enactment.”

The Supreme Court also rejected the Massachusetts Supreme Court’s holding that stun guns may be banned as “dangerous and unusual weapons.” As explained in the Court’s per curium opinion: “By equating ‘unusual’ with ‘in common use at the time of the Second Amendment’s enactment,’ the court’s second explanation is the same as the first; it is inconsistent with Heller for the same reason.”

Finally, the Court dismissed the Massachusetts court’s finding that “nothing in the record to suggest that [stun guns] are readily adaptable to use in the military.” As highlighted by the justices, Heller rejected the proposition “that only those weapons useful in warfare are protected.”

The Concurrence in Commonwealth v Caetano

Justice Samuel Alito filed a concurring opinion, in which Justice Clarence Thomas joined. The concurring justices argued that the Massachusetts stun gun law was outright unconstitutional and, therefore, the case need not be remanded. “If the fundamental right of self-defense does not protect Caetano, then the safety of all Americans is left to the mercy of state authorities who may be more concerned about disarming the people than about keeping them safe,” Justice Alito wrote.