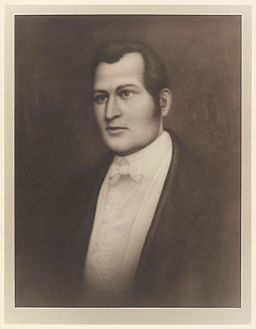 U.S. District Court for the District of Missouri Judge James H. Peck was the third judicial officer impeached by the U.S. House of Representatives. The Senate, however, found him not guilty of the abuse of power charges.

Born in 1790, in Jefferson County, Tennessee, Peck fought during the War of 1812. After the conflict ended, he established a private law practice in Tennessee and later Missouri. In 1822, President James Monroe nominated Peck to serve on the United States District Court for the District of Missouri. Under 3 Stat. 653. H, Congress organized Missouri as one judicial district and authorized one judgeship for the U.S. district court. Peck served as a U.S. district court judge for U.S. District Court for the District of Missouri from 1822 to 1836.

Article III, Section 1 of the Constitution provides that judges “shall hold their Offices during good Behavior.” Meanwhile, Article II, Section 4 defines impeachment offenses as “Treason, Bribery, and other high Crimes and Misdemeanors.” Under Article I, the House of Representatives has “the sole Power of Impeachment” of federal officers, while the Senate has “the sole Power to try all Impeachments.”

Judge Peck faced impeachment for how he responded to a lawyer who criticized one of his decisions. In response to Peck’s ruling in a land dispute arising out of the Louisiana Purchase, attorney Luke Lawless published an anonymous letter that rebutted the judge’s legal reasoning.

After discovering his identity, Peck charged the attorney with contempt, ordered him to be imprisoned for 24 hours, and disbarred him for 18 months. The contempt order charged the lawyer with the following:

Intent to impair the public confidence in the upright intentions of said court, and to bring odium upon the court, and especially with intent to impress the public mind, and particularly many litigants in this court, that they are not to expect justice in the cases now pending therein.

The scorned attorney advocated for Peck to be impeached. At Peck’s subsequent impeachment trial, members of the House debated whether one incident of gross abuse of power rose to the level of impeachment. The House ultimately passed Articles of Impeachment after determining that his conduct was unjust, arbitrary, and beyond the scope of his duty.

The Senate acquitted Peck of the abuse of power charge, with just one vote separating the guilty and not guilty votes. He held his seat on the district court until his death in 1836.