Conditions for Land Use Approvals Require a Nexus to the Property 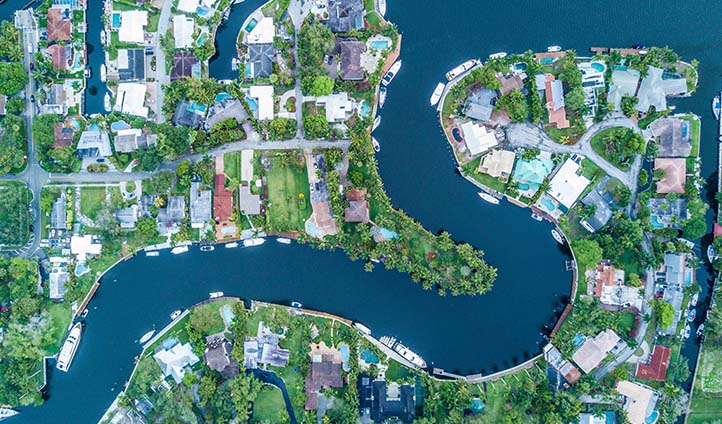 In Koontz v St Johns River Water, 133 S.Ct. 2586 (2013), the U.S. Supreme Court held that government may only condition approval of land-use permits based on conditions that have a nexus to the land use and are approximately proportional to the effects of the proposed land use. The Court further held that the standard applies even if the condition mandates the payment of money, and even if the permit is denied for failure to agree to the condition.

In 1994, Coy Koontz, Sr. sought permits to develop a section of his property from St. Johns River Water Management District (District), which, consistent with Florida law, requires permit applicants wishing to build on wetlands to offset the resulting environmental damage. Koontz offered to mitigate the environmental effects of his development proposal by deeding to the District a conservation easement on nearly three-quarters of his property. The District rejected Koontz’s proposal and informed him that it would approve construction only if he (1) reduced the size of his development and deeded to the District a conservation easement on the resulting larger remainder of his property or (2) hired contractors to make improvements to District-owned wetlands several miles away.

Believing the District’s demands to be excessive in light of the environmental effects his proposal would have caused, Koontz filed suit under a state law that provides money damages for agency action that is an “unreasonable exercise of the state’s police power constituting a taking without just compensation.” The trial court found the District’s actions unlawful because they failed to satisfy the requirements of Nollan v. California Coastal Comm’n, 483 U.S. 825 (1987), and Dolan v. City of Tigard, 512 U.S. 374 (1994). In those cases, the U.S. Supreme Court held that the government may not condition the approval of a land-use permit on the owner’s relinquishment of a portion of his property unless there is a nexus and rough proportionality between the government’s demand and the effects of the proposed land use.

A divided Supreme Court sided with Koontz by a vote of 5-4. “The government’s demand for property from a land-use permit applicant must satisfy the Nollan/Dolan requirements even when it denies the permit,” the Court held.

According to the majority, the “principles that undergird Nollan and Dolan do not change depending on whether the government approves a permit on the condition that the applicant turn over property or denies a permit because the applicant refuses to do so.” As Justice Samuel A. Alito Jr. explained:

Recognizing such a distinction would enable the government to evade the Nollan/Dolan limitations simply by phrasing its demands for property as conditions precedent to permit approval…It makes no difference that no property was actually taken in this case. Extortionate demands for property in the land-use permitting context run afoul of the Takings Clause not because they take property but because they impermissibly burden the right not to have property taken without just compensation. Nor does it matter that the District might have been able to deny Koontz’s application outright without giving him the option of securing a permit by agreeing to spend money improving public lands.

The majority further concluded that the government’s demand for property from a land-use permit applicant must satisfy the Nollan/Dolan requirements even when its demand is for money. As Justice Alito wrote:

Contrary to respondent’s argument, Eastern Enterprises v. Apfel, 524 U. S. 498, where five Justices concluded that the Takings Clause does not apply to government-imposed financial obligations that “d[o] not operate upon or alter an identified property interest,” id., at 540 (KENNEDY, J., concurring in judgment and dissenting in part), does not control here, where the demand for money did burden the ownership of a specific parcel of land. Because of the direct link between the government’s demand and a specific parcel of real property, this case implicates the central concern of Nollan and Dolan: the risk that the government may deploy its substantial power and discretion in land-use permitting to pursue governmental ends that lack an essential nexus and rough proportionality to the effects of the proposed use of the property at issue.

Justice Elena Kagan wrote a dissenting opinion in which Justice Ruth Bader Ginsburg, Justice Stephen G. Breyer, and Justice Sonia Sotomayor joined. “The majority turns a broad array of local land-use regulations into federal constitutional questions,” Justice Kagan wrote. “It deprives state and local governments of the flexibility they need to enhance their communities—to ensure environmentally sound and economically productive development. It places courts smack in the middle of the most everyday local government activity.” She added: “As those consequences play out across the country, I believe the Court will rue today’s decision.”