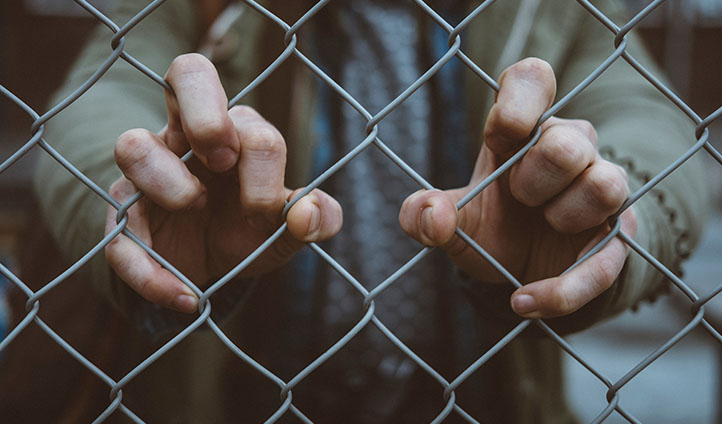 In Jennings v Rodriquez, 583 U. S. ____ (2018), a divided U.S. Supreme Court held that detained immigrants do not have the right to periodic bond hearings during the course of their detention. It further ruled that Ninth Circuit Court of Appeals misapplied the canon of constitutional avoidance in holding otherwise.

Federal law dictates when detained immigrants are eligible to post bond and be allowed release from custody. Under 8 U.S.C. 1225(b), inadmissible aliens who arrive at our Nation’s borders must be detained, without a bond hearing, during proceedings to remove them from the country. Under 8 U.S.C. 1226(c), certain criminal and terrorist aliens must be detained, without a bond hearing, during removal proceedings. Under 8 U.S.C. 1226(a), other aliens may be released on bond during their removal proceedings, if the alien demonstrates that he is not a flight risk or a danger to the community. Aliens detained under Section 1226(a) may receive additional bond hearings if circumstances have changed materially.

After a 2004 conviction, Alejandro Rodriguez, a Mexican citizen and a lawful permanent resident of the United States, was detained pursuant to §1226 while the Government sought to remove him. In May 2007, while still litigating his removal, Rodriguez filed a habeas petition, claiming that he was entitled to a bond hearing to determine whether his continued detention was justified.

In this suit, he and the class of aliens he represents allege that §§1225(b), 1226(a), and 1226(c) do not authorize “prolonged” detention in the absence of an individualized bond hearing at which the Government proves by clear and convincing evidence that detention remains justified. The District Court entered a permanent injunction, and the Ninth Circuit affirmed. Relying on the canon of constitutional avoidance, the Ninth Circuit construed §§1225(b) and 1226(c) as imposing an implicit 6-month time limit on an alien’s detention under those sections. After that point, the court held, the Government may continue to detain the alien only under the authority of §1226(a). The court then construed §1226(a) to mean that an alien must be given a bond hearing every six months and that detention beyond the initial 6-month period is permitted only if the Government proves by clear and convincing evidence that further detention is justified.

By a vote of 6-3, the Supreme Court reversed the Ninth Circuit. “Immigration officials are authorized to detain certain aliens in the course of immigration proceedings while they determine whether those aliens may be lawfully present in the country,” the majority held.

Justice Samuel Alito wrote on behalf of the Court, concluding that the federal immigration law authorizes detention “until the end of the applicable procedure,” and that “there is no justification for any of the procedural requirements” that the appeals court added. He further explained:

The Court remanded the case back to the Ninth Circuit for consideration of the merits of plaintiffs’ constitutional arguments in the first instance. However, before doing so, the Court advised that the Ninth Circuit should also reexamine whether the immigrants can continue litigating their claims as a class.

Justice Stephen G. Breyer authored a dissenting opinion, in which Justices Ruth Bader Ginsburg and Sonia Sotomayor joined. Justice Breyer emphasized his disagreement with the majority by reading his dissent from the bench. “We need only recall the words of the Declaration of Independence,” Breyer said, “in particular its insistence that all men and women have ‘certain unalienable Rights,’ and that among them is the right to ‘Liberty.’ ”

“Whatever the fiction, would the Constitution leave the Government free to starve, beat, or lash those held within our boundaries?” Breyer argued. “If not, then, whatever the fiction, how can the Constitution authorize the Government to imprison arbitrarily those who, whatever we might pretend, are in reality right here in the United States?” Breyer added, “No one can claim, nor since the time of slavery has anyone to my knowledge successfully claimed, that persons held within the United States are totally without constitutional protection.”

Justice Clarence Thomas, joined by Justice Neil Gorsuch, also dissented. They argued that the case should have been dismissed because the courts do not have the power to hear the claims. However, because the majority concluded otherwise, they joined the decision.