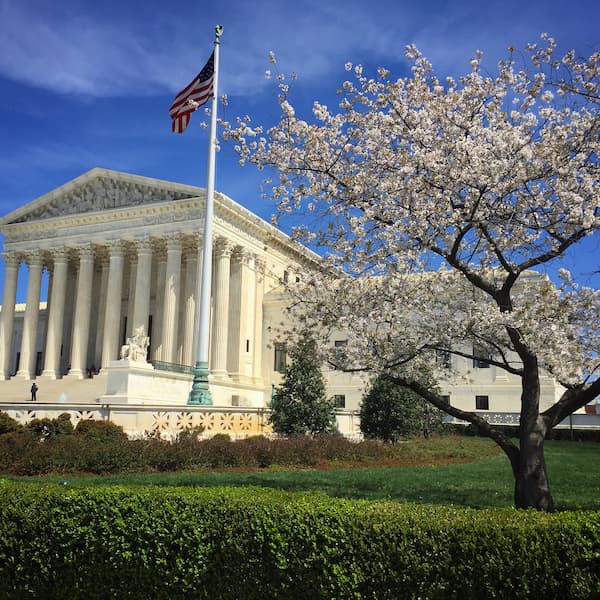 The U.S. Supreme Court recently returned to the bench for its February sitting. The justices heard oral arguments in three cases. The issues before the Court involved Native American law and immigration.

Denezpi v. United States: The case involves the Constitution’s double jeopardy clause and how it applies toa prosecution in the Court of Indian Offenses. Under the double jeopardy clause, no person can be convicted twice of the same offense.The specific question before the Court is whether the Court of Indian Offenses of Ute Mountain Ute Agency is a federal agency such that Merle Denezpi’s conviction in that court barred his subsequent prosecution in a United States District Court for a crime arising out of the same incident?

Ysleta del Sur Pueblo v. Texas: The case involves gaming activities on Native American land in Texas. In 1987, following years of negotiation and drafting, the Ysleta del Sur Pueblo and Alabama-Coushatta Tribe of Texas secured restoration of their trust relationships with the federal government through the Ysleta del Sur Pueblo and Alabama-Coushatta Indian Tribes of Texas Restoration Act (Restoration Act). That Act includes a “Gaming Activities” provision that states in relevant part: All gaming activities which are prohibited by the laws of the State of Texas are hereby prohibited on the reservation and on lands of the tribe; and Nothing in this section shall be construed as a grant of civil or criminal regulatory jurisdiction to the State of Texas. In 1994, the Fifth Circuit’s decision in Ysleta del Sur Pueblo v. Texas, 36 F.3d 1325 (5th Cir. 1994) (“Ysleta I”) granted Texas regulatory jurisdiction over non-prohibited gaming activities on the Tribes’ lands. The justices have agreed to decide the following question: “Whether the Restoration Act provides the Pueblo with sovereign authority to regulate non-prohibited gaming activities on its lands (including bingo), as set forth in the plain language of Section 107(b), the Act’s legislative history, and this Court’s holding in California v. Cabazon Band of Mission Indians, 480 U.S. 202 (1987), or whether the Fifth Circuit’s decision affirming Ysleta I correctly subjects the Pueblo to all Texas gaming regulations.”

Arizona v. City and County of San Francisco, California: The case revolves around a legal challenge to a federal immigration rule. Under the Immigration and Nationality Act (8 U.S.C. §1182(a)(4)(A)), an alien is “inadmissible” if, “in the opinion of the [Secretary of Homeland Security] at the time of application for admission or adjustment of status, [the alien] is likely at any time to become a public charge.” Following notice-and-comment rulemaking, the United States Department of Homeland Security (DHS) promulgated a final rule (the “Rule”) interpreting the statutory term “public charge” and establishing a framework for applying it. Litigation about the Rule ensued, and the Supreme Court granted review of the Second Circuit’s opinion. DHS v. New York, No. 20- 449 (U.S. Feb. 22, 2021). However, the United States suddenly announced it would no longer pursue its appeals, which resulted in a partial grant of summary judgment and vacatur of the Rule in one district court, applying nationwide. The Petitioning States quickly moved to intervene in the Ninth Circuit to protect their interests previously represented by the United States. The Ninth Circuit, however, denied the Petitioning States’ motion. The justices have agreed to consider the following question: “Whether States with interests should be permitted to intervene to defend a rule when the United States ceases to defend.”