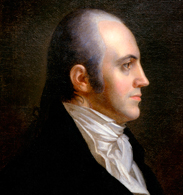 Aaron Burr served as Vice President of the United States under President Thomas Jefferson. However, he is most well-known for his duel with Alexander Hamilton.

Burr was born in Newark, New Jersey in 1756. During the Revolutionary War, he served under Benedict Arnold and George Washington. When the war ended, Burr obtained his law degree and became a successful New York attorney. In 1783, he was elected to the New York Assembly, which launched his political career. He subsequently served as the state’s Attorney General.

In 1791, Burr was elected to the U.S. Senate. He served for six years, before losing his re-election bid to General Philip Schuyler, Alexander Hamilton’s father-in-law. Burr blamed Hamilton for the loss, igniting a bitter political rivalry between the two men.

After losing his U.S. Senate seat, Burr was elected to the New York state legislature and became a leader in the Democratic party. In 1800, Burr ran for President alongside Thomas Jefferson. Both candidates received 73 electoral votes. Under the U.S. Constitution, the House of Representatives was forced to break the tie. Hamilton was a vocal supporter of Jefferson, who was ultimately named president. Burr became the vice president. Three years later, the 12th Amendment was enacted, which established separate Electoral College votes for president and vice president.

As president of the Senate, Burr presided over the impeachment trial of Supreme Court Justice Samuel Chase. However, President Jefferson gave him little power in his administration.

As his term drew to a close, Burr unsuccessfully ran for governor of New York. He again held Hamilton responsible for his failure and challenged him to a duel. On July 11, 1804, Burr and Hamilton engaged in duel in Weehawken, New Jersey. Both men fired, and Hamilton was fatally wounded. While the public was outraged, Burr served the remainder of his term as vice president and was never tried for engaging in the illegal duel.

Three years later, Burr was charged with treason for trying to build support for a war with Spain. Although he was later acquitted, Burr’s political career was finished. He spent several years in Europe and later returned to the United States to reestablish his law practice. He died in 1836 at the age of 80.